By Tom Duggan on August 31, 2015Comments Off on Despite Media Reports, Lawrence 911 Dispatcher is Not Suspended for Hanging up on Spanish Speaking Callers 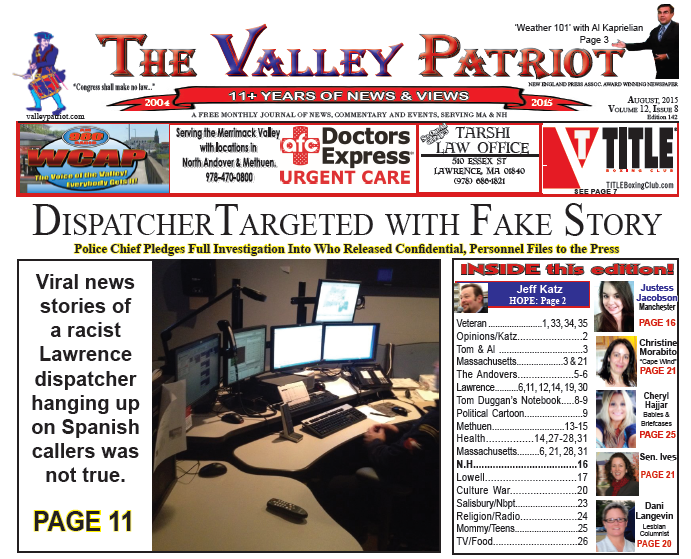 Explosive new details have come to light revealing that viral media reports on a 911 dispatcher in Lawrence, whose “job is on the line” over hanging up on Spanish-speaking callers … is false.

CBS news and other outlets reported this week “A 911 dispatcher’s job is on the line for hanging up on callers who couldn’t speak English.”

An investigation by The Valley Patriot shows that the dispatcher’s job is not “on the line” over hanging up on callers who can’t speak English, and that audio tape recordings of 911 calls leaked to the media were doctored and purposely misrepresented.

Ed “Ike” Gabriel head of the SEIU union in Lawrence told The Valley Patriot that the 911 dispatcher is not on suspension because of any of the calls released to the media and played on TV.
“She had a complaint about a previous case that was already settled and that’s why she’s out on leave,” Gabriel said. “It had absolutely nothing to do with these calls being played on TV.”

Gabriel also said that anyone listening to the entirety of the phone calls broadcast on TV new would see that the story was simply “made up.”
“First of all, one of the callers who spoke no English was not calling on the 911 line as reported in the press, he called the Lawrence Police business line,” Gabriel said.

Gabriel also says that callers to 911 can have their calls translated with a special program on the internet where translators can be brought into the phone call, on-line and translate for the dispatcher what the caller is saying.
“But they don’t have that capacity if someone calls the business line. This is the standard operating procedure for all 911 call takers,”Gabriel said.

That claim is backed up by Lawrence City Councilor Marc LaPlante’s report to The Valley Patriot in 2013 when he toured the station and the 911 call center, as well as Captain MacNamara of the Lawrence Police who confirmed it on 980WCAP.

The other phone call used in the CBS report (and other media stories) shows that the a caller on a 911 line who claimed not to speak English at the beginning of the call, then spoke English fluently for more than two minutes with dispatcher. Police logs show that media reports of her hanging up on callers and refusing to send a cruiser is also not true.

“The fact is, this dispatcher did everything she was trained to do. She kept the person on the phone until she could determine the facts and dispatched a cruiser to the scene. What’s more, her supervisor, Captain MacNamara signed off on that call as a good call. Now suddenly CBS and the Eagle Tribune are reporting that she is on suspension because of these calls is ‘simply not the case’.” 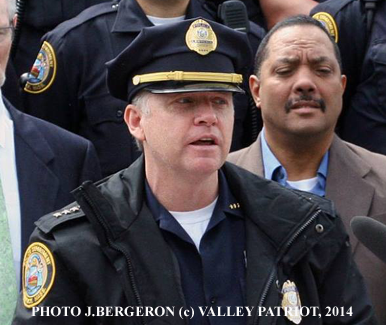 Gabriel also said he is calling for an investigation into how information from the dispatchers private personnel files at the police station ended up in the Eagle Tribune.

“First of all, we took a look at her personnel file at city hall and none of the information in these media reports are in those files. But the police department keeps their own set of personnel records and from what we can see it was information from those files that were illegally given to the media, namely the Eagle Tribune. This dispatcher is being targeted with a media campaign to assassinate her character.”

Lawrence Police Chief James Fitzpatrick told The Valley Patriot on Tuesday that he is going to aggressively investigate who illegally leaked the dispatcher’s personnel files to the media, stating that “only three or four people would have access to those records and I will investigate who is responsible.”

Lawrence Police Captain Scott MacNamara said that this was an incident of two bad calls of a 911 dispatcher out of the thousands of calls taken by the Lawrence police every year. In an exclusive interview with 980WCAP, Capt. MacNamara said that the media had given the wrong story and that there was no racial component to any of this.

“These are two of 5,000 phone calls that I’ve listened to and they were marked as unacceptable. They were referred to the lieutenant, who then investigated further and made a recommendation to myself and the chief. That employee was disciplined as a result. Frankly that’s where the story should end. I agree with you that this is taking on a life of its own, it fits a national narrative regarding race. I don’t think that was a factor, frankly, in this investigation.”

“My focus was on the process,” he continued. “We work very hard, and very diligently to create a good public image with the citizens of Lawrence. We [the police] get 50,000 calls for service each year, and our call takers field over 100,000 calls for service per year. We are literally knocking on doors in an effort to meet people, and engage them through our citizen engagement project. We are doing everything we can to engage with citizens. And one of the things we are encouraging them to do, Tommy, is to call 911, call our business lines, when they see something say something. That’s what we are telling people.”

SEIU Union head Ike Gabriel said that he was disappointed the media ran with a story without checking any facts, and that comments made by the chief of police and the mayor were not only wrong, but legally actionable as the dispatcher has retained Haverhill attorney Tom Gleason.

“The other thing that is really disgusting about all this,” Gabriel continued, “is that she has been portrayed as a racist. Yet her biggest support at the station is from the other Hispanic dispatchers and officers. I think we all know what’s going on here, they tried to get rid of her with the previous allegation she was already punished for on a call that had nothing to do with language or race. They couldn’t get rid of her on that trumped-up charge so now they are trying to get rid of her on these bogus media allegations … but let me be clear, her job is not on the line because of these allegation and she is not on suspension for mishandling Spanish-speaking callers.”

“This dispatcher is the least racist person you will ever meet and what is being done to her is wrong.”

Gabriel says that he believes the dispatcher is being targeted and that the majority of the calls audited by Captain MacNamara were call by this dispatcher citing union rules for random call audits.

Capt. MacNamara said that this claim was simply not true and that the calls he audited were by the book.

ALL IN AGREEMENT STORY WAS WRONG

Both Ike Gabriel and Capt. MacNamara agree that the news accounts of this story were not only wrong but also that someone had illegally released information from the dispatchers file at the police station to the media, namely the Eagle Tribune.

“Another perception in the Eagle Tribune, that came out of that article is that this somehow happened and nothing was being done about it,” Capt. MacNamara said. “What happened here is, that I had identified those calls as unacceptable and we disciplined the employee as a result.

As for the confidential information from police files at the station leaked to the press, MacNamara said he is confident they will find out who was responsible.

“I know the chief represented to The Valley Patriot that he will conduct a thorough investigation, he’s certainly a man of his word and he will follow through with that. It’s truly regrettable that these audiotapes got to the media (as well). These were incidents that happened in November, the employee was disciplined and that’s where it should have ended.” “But that’s not a story that fits the national narrative.”

“Over the past two years I’ve listened to almost 5,000 phone calls, I’ve spent countless hours listening to these calls, I am truly impressed with the quality of service we are providing to the citizens of Lawrence. Our civilian staff and our sworn staff is doing an outstanding job on these calls. This is just s small, minute sampling of calls that were unacceptable. There were some that needed improvement, but by and large our people are doing a wonderful job and I’m proud to be working side by side with them.”

Despite Media Reports, Lawrence 911 Dispatcher is Not Suspended for Hanging up on Spanish Speaking Callers added by Tom Duggan on August 31, 2015
View all posts by Tom Duggan →