By Tom Duggan on September 23, 2015Comments Off on ELECTION RESULTS, Lawrence Council Candidate Loses by One Vote, Will Ask for Recount

With only 9% of registered voters in Lawrence participating in the city’s preliminary elections, at least one candidate has found himself one vote shy of being nominated for city council.

Rich Russell, a Viet Nam veteran and activist at council meetings, placed seventh in an eight way race, being eliminated by one vote with 663 votes. The sixt place finisher who made the cut and will go on to the November final was former District C Councilor Jorge Gonzalez.

Perhaps the most surprising results were higher up on the at-large (city wide) council race where At Large City Councilor Nilka Alvarez Rodriguez placed fourth (three get elected in November) to School Committeeman Jim Blatchford who got heavy support from Mayor Rivera including an endorsement and automated phone calls. Embattled City Council President Modesto Maldonado placed second to newcomer Brian Depena a long time activist in the Dominican community. Depena was the brain trust behind the successful campaign of outgoing District D City Councilor Onaida Aquino.

Lawrence Police Officer William Green, who is part of an effort to recall Lawrence Mayor Dan Rivera placed last in the at-large race. Four of the five candidates at the bottom of the at-large list support the recall.

Candidate Rich Russell says he will be calling for a recount. 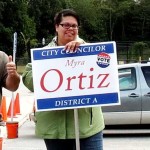 The Lawrence City Council is made up nine members. Three city councilors are elected at-large (elected city-wide) and six members elected by districts representing an equal number of people in the city.

District A is the Prospect Hill section of the city. It is currently represented by Sandy Almonte who did not turn in her nomination papers by the deadline because of a health issues. School committee member Myra Ortiz did turn in papers and was the only candidate on 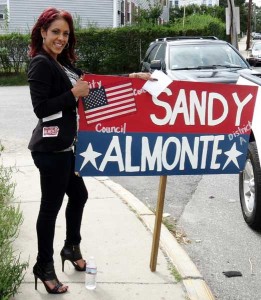 the ballot. Almonte, however was out passing out stickers with her name and address on it for voters to use to get the required 50 write-ins to have her name appear on the November final ballot.

Almonte told The Valley Patriot that she decided not to turn in her nomination papers because of a pending health issue where she was waiting for word from her doctor on some test results. Almonte said that she got good news from her doctor after the deadline and decided to try and keep her seat with a successful write in campaign. 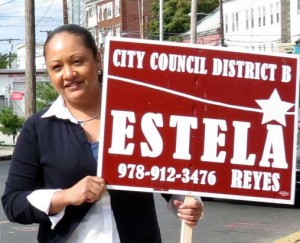 In the District B Section of Lawrence, third term incumbent City Councilor Estella Reyes defeated third time candidate Ruth Rojas. Reyes garnered 492 votes, defeating Rojas who only had 147 votes. Both candidates will advance to the November final. “The message is still the same [for me]. I’m here for my community, I work for them and I am always going to be open to them. They know every single time they call me I’m always there for them.

District D includes the Tower Hill area of Lawrence. Incumbent District Councilor Onaida Aquino is not seeking reelection. This was the tightest race in the city with two newcomers, School Committeeman Jeovanny Rodriguez had 300 votes to Linett Perez’s 193 votes for a difference of seven votes. Both will advance to the final. 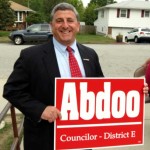 District E is the South Lawrence West section of Lawrence. The incumbent City Councilor Eileen Bernal resigned last month to take a job in the Mayor’s Office as his new chief of staff. She was not replaced. Former Lawrence City Councilor Dave Abdoo, who also has the distinction of challenging Willie Lantigua for Mayor in 2009, handily defeated Frederick Diaz a former member of Lantigua’s staff. Abdoo had 598 votes to Diaz’s 174 votes for a difference of 424 votes. Both will advance to the final.

Incumbent Lawrence City Councilor Marc Laplante garnered nearly 80% of the vote in the South Lawrence East section of Lawrence. Laplante defeated newcomer Robert Flete 303 votes to 75 votes. Both will advance to the final election in November.

On Prospect Hill Myra Ortiz is leaving the school committee to run for city council. There was no candidate to replace her.

There were no candidates in this race.

Incumbent Pavel Payano was challenged by former Lawrence School Teacher Amy Berard. Payano had 222 votes more than Berard. Payano garnered 349 votes to Berard’s 127. Both will advance to the final.

There were no candidates in this race.

Incumbent Patricia Mariano a former teacher and principal in the Lawrence Public Schools had 636 votes to challanger homayoun Maali’s 79 votes. Both will advance to the final.

There are three Lawrence representatives on the Greater Lawrence Technical School Committee. All three incumbents won nominations and will be reelected in November.

ELECTION RESULTS, Lawrence Council Candidate Loses by One Vote, Will Ask for Recount added by Tom Duggan on September 23, 2015
View all posts by Tom Duggan →