Lawrence Firefighter and community activist Manuel “Juan” Gonzalez launched his official campaign kickoff for Mayor Thursday night before a packed room of about 100 people at the Firefighter’s Relief In.

Former Lawrence City Councilor David Abdoo, who lost the mayor’s race to Lantigua in 2009, introduced Gonzalez saying he had remained on the sidelines of Lawrence politics in the last four years but was getting involved again to help Gonzalez run for mayor.

“I see in him what I want from a mayor, and that is someone who carries themselves in a way that not only I can be proud of, but we can all be proud of. So, the time to stay on the sidelines for me ended with Juan,” Abdoo said.

Gonazlez also goes by Juan as his nickname. Abdoo says  that when Gonazlez is not fighting fires, he is running out to help families who’s homes have burned down.

“This is a guy who fights fires for a living, so on his days off what does he want to do? He goes out and helps these people affected by these fires. So, that is just phenomenal.”

Gonzalez who is Puerto Rican, is a member of the Heal Lawrence, a non profit group that helps get donated items to families who are victims of fires in Lawrence when he is off duty from the Lawrence Fire Department. He also worked as one of the coordinators for one of two failed recall petitions against Mayor Lantigua.

“This is a man who has raised a family here, Abdoo said. “I love his passion.”

“I came to Lawrence in 1982,” Gonzalez said addressing the room. 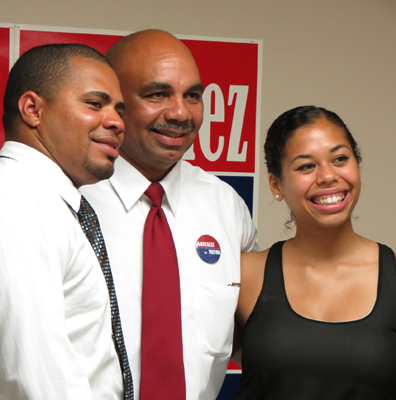 “I went to Lawrence High School and I know what it’s like to come here and have nothing and start from the bottom up. I worked at Flavor Fresh as my first job, for $3.35 an hour on Prospect Street.  I used to have to walk home from there after a long day. I worked at Malden Mills for $5 an hour cleaning the ovens. From there I worked in the Lawrence School Department doing custodian work for $7.45 an hour. So I said, ‘hey, this is great, we came to the United States for a better life and we’re finding it, it’s getting better on a daily basis.’”

“It was about 160 years ago this city was founded by immigrants who came here looking for a better life. 160 years later here I am running for mayor, living the dream.

“People are asking me, ‘why are you running for mayor?’ I care. I care and I’m not just going to cross my arms and not do anything about it. I have no personal vendettas, I am just a regular guy who cares about the city, and I believe I care the most of all the candidates and I want what’s best for the City of Lawrence,” Gonzalez told the Valley Patriot.

Gonzalez balked at the opportunity to attack Mayor Lantigua and refused to discuss any of the corruption investigations against the current mayor saying he wants to concentrate on the city and making the city better. 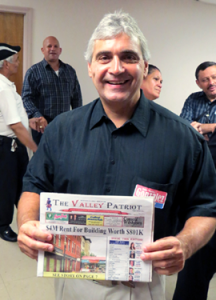 Asked why he was supporting Gonzalez, former Lawrence Mayor Michael Sullivan said Gonzalez has what it takes to work with everyone regardless of their race or political affiliation.

“I’m here because Lawrence needs someone who isn’t going to divide people running the city,” Sullivan said. “Lawrence needs a guy who can handle the day to day challenges this city faces and is willing to work with people. What we have now is a guy who has an enemies list, if you elect Manny Gonzalez all that will stop. He will judge every issue on the merits, not based on who proposed it. I think the people of Lawrence deserve that,” Sullivan told The Valley Patriot.