Ron Francis is an Andover High School teacher, co-chair of the Massachusetts Green-Rainbow Party, leader in the Somerville Divestment Project and, as some in thecommunity would argue, is “anti-Semitic.”

“Ron Francis’ politics, statements and actions are anti-Semitic,” says Eric Danis, a graduate of Andover High School. “Both his Somerville Divestment Project and the Green-Rainbow Party are suggesting boycotting and divesting from only one country in the entire world – the Jewish state of Israel,” adds Danis.

The controversy behind Francis began when he posted a letter on the Web site of the Somerville Divestment Project, defending the terrorist group Hamas and stating that Israel commits far more terrorist activities than the Palestinians. The letter was titled “Media Bias on Hamas,” where Francis says that the silver lining was with Hamas’ electoral victory. Francis also calls for “One Palestine.”

The divestment project was intended to convince the city of Somerville to stop investing in Israeli bonds. The project failed, but Francis continues to place himself in leadership positions like becoming co-chair of the Green-Rainbow Party, to continue his fight against Jews and Israel.

A letter written June 20th to David Driscoll, Commissioner of Education, by Concerned Citizens from Somerville, asked that an investigation be held. They specifically refer to literature from Francis’ Somerville Divestment Project and the Green-Rainbow Party’s “anti-Jewish articles and event notices which are shocking in their blatant incitement to Jew-hatred.” The letter and a packet of information were also sent to the Andover School Committee and Andover school administrators.

The letter begins: “As residents of Somerville, we are all too familiar with the hate-filled anti-Semitic propaganda that Mr. Francis and his organization (the Somerville Divestment Project) injected into our community.” 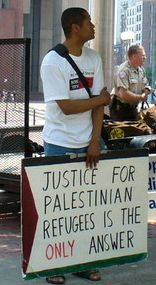 Francis recently sent an e-mail to members of the Green-Rainbow Party Administrative Committee to arrange for Andover High School students to receive academic credit for serving as interns with the Green-Rainbow Party. So far, the Andover School Committee is not investigating this matter. Not surprisingly, the Andover Teachers’ Union president, Tom Meyers, is defending Francis.

Francis admitted in another Andover newspaper article that he paid four Andover students to canvas in Somerville for the Somerville Divestment Project.

Danis says that a teacher who pays students to advance his twisted political views should be investigated immediately.

“If the people of Andover don’t demand immediate action, they will not be able to complain if more teachers decide to mix politics with the public school students,” said Danis.

Danis also hopes the Andover school administration treats this issue with the seriousness it deserves and removes Francis from his position before he can “ideologically coerce more students.”

The “Talk, Rock and Walk with Israel” rally was held on Boston City Hall Plaza on June 18th, where white supremacists joined in with Francis and the Green-Rainbow party to protest the peaceful gathering of American Jews (and their supporters) who were celebrating Israeli Independence Day.

Advocates of the Iraqi terrorist insurgency, currently shooting at American soldiers, also joined Francis at the protest in Boston (see picture, below). Francis is seen at the protest rally holding a sign with the slogan, “Long Live the Intifada.” The Intifada is the terrorist Palestinian uprising against Israel.

The Jewish Advocate wrote an editorial last month about Francis, asking: “Would you want a teacher educating your kids who protests at an Israel rally by chanting, “Long live the Intifada”? 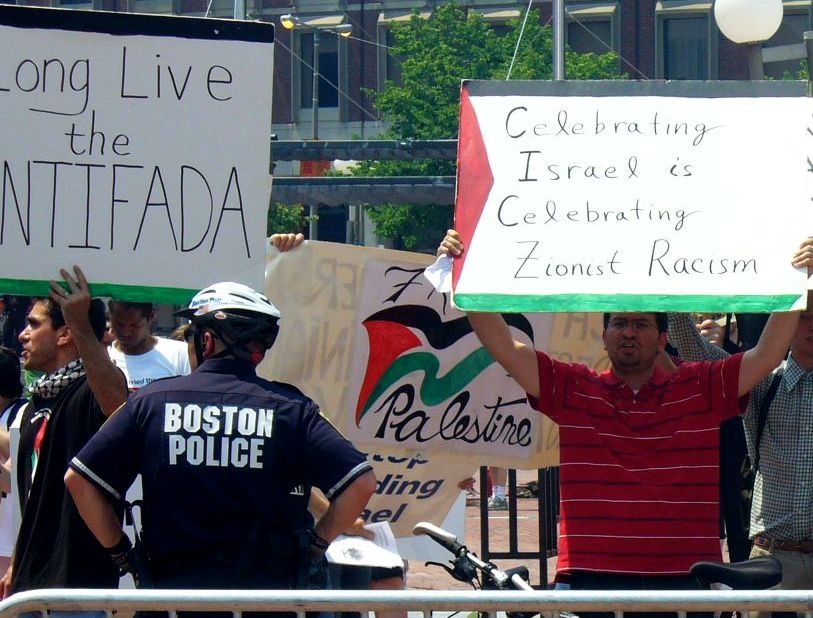 The Green-Rainbow Party’s new position and its statements on Israel have many members leaving the party out of concern that it is being overrun by Jew haters.

Lawrence Conservation Committee Chair and Green Party member Tennis Lilly says that he is very concerned with the party taking such a radical position towards Israel.

“I think the current Mass. Green-Rainbow position on the Israeli-Palestinian conflict is inconsistent with our values. The only people who have the right to determine a just solution are the Israelis and Palestinians.”

“Terrorism is wrong, period. It’s wrong regardless of who does it, who the victim is, and why. To say otherwise directly contradicts Green values. You cannot say terrorism is wrong and then support suicide bombings by the Palestinians because they are only killing Jews,” Lilly said.

Lilly is also concerned that Francis’ reputation as an anti-Semite is damaging the Green Party. “Ron’s activism in this area, especially the harsh rhetoric he uses, hurts the party. When people read some of the things that Ron says, it only reinforces all of the bad and inaccurate stereotypes about the Left,” Lilly added.

This deception allows Francis’ preaching of his views to students with tacit support of school officials. Views from folks like Tennis Lilly are very important in that regard,” she added.

“Some of the articles posted on SDP’s Web site are “reminiscent of what was coming out of Nazi Germany in the 1930s,” says Krasko. “He (Francis) aligns himself with the most rejectionist forces in the Middle East,” she says.

Francis frequently calls Israel a “Jewish apartheid state,” but he never mentions the facts that the Palestinians have adopted Islamic law into their constitution, or that they are governed currently by an Islamic party. Why aren’t they labeled as an “Islamic apartheid state”? asks Danis.

Danis says he moved to Israel during the height of the Palestinian terror war (the summer of 2001). “The morning of January 29, 2004, is a morning that I will never forget,” he recalls. “I had a nice breakfast with my fiancée, Anat (we are now married), in my apartment and then she had to leave. A few short minutes later, I heard a huge ‘BOOM,’ and I immediately began to panic. I called Anat and verified that she was OK, and then ran outside to see what had happened. I arrived and immediately saw a bus that had been destroyed by a Palestinian homicide bomber. There seemed to be corpses everywhere (most of them missing body parts). Wounded, bloodied victims screamed in pain.”

“Eleven people died in that attack on my former street in Jerusalem and over 50 were wounded. One of those killed was a former co-worker of mine, an extremely nice girl with the same name as my fiancée, Anat,” Danis remembers.

“Having personally experienced terror and its horrifying consequences for everyone involved, I was shocked to learn that Andover High School teacher, Ron Francis, was supporting and defending the terror group Hamas,” stated Danis.

In a June 15 article in the Andover newspaper, Francis said, “I do not condemn the Palestinian people, because the actions they are taking [suicide bombings and targeting civilians], given the circumstances they face, (are) completely understandable and within the bounds of normal human behavior. I have to ask myself, would I be any different?”

Some in the community agree that Francis wouldn’t be any different. Both Lilly and Danis questioned: “How can Francis call himself a human rights activist when he admits he supports violence [terrorism] against civilians?”

A link from the Green-Rainbow Party Web site goes directly to the New England Committee to Defend Palestine (NECDP), a radical group devoted to the destruction of Israel and the support of terrorist suicide bombings.

The NECDP is on the Anti-Defamation League’s Web site, which lists them as anti-Semitic, quoting the organization as “equating Jews with Nazis” and calling for the destruction of Israel.

The co-founder of the NECDP, Amer Jubran, was recently deported to Jordan after being investigated by the Office of Homeland Security, the INS and the FBI. The NECDP is also part of International A.N.S.W.E.R., where Jubran was actively involved.

(photos courtesy of www.solomonia.com) If you have any questions or comments about this article please email them to valleypatriot@aol.com.