By Dr. Charles Ormsby on November 6, 2005Comments Off on Hero in our Midst – CPL. Harvey Gibeau – Valley Patriot of the Month, 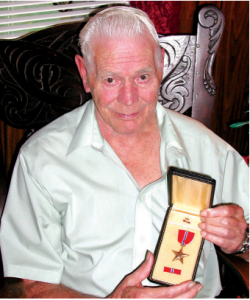 Harvey Gibeau was born in Lawrence in 1923 and after high school he joined the Civilian Conservation Corps in the late 1930s. He vividly remembers the ever-present sense of patriotism that prevailed. Patriotism was a common household word and was an expected personal trait in his family.

In July of 1942, Harvey enlisted in the Army with the fervent hope that he would be assigned to an anti-aircraft artillery (AAA) unit. He felt fortunate when his wish came true. He was sent to Ft. Eustis, Virginia for the standard 13 weeks of basic training and then shipped to Battery Park, New York for anti-aircraft defense of the city while awaiting an overseas assignment.

As part of the 414th AAA Battalion in New York, Harvey manned 40 mm anti-aircraft guns that were set up to defend the Squib and telephone company buildings. His unusually good stereoscopic vision was invaluable in using specially designed equipment to estimate the range of targets, and this became his specialty.

Although the accommodations in New York City consisted of army-issue tents, it was a relatively peaceful assignment since German warplanes never made it to the U.S. Harvey’s stateside duty came to an end in June 1943 when he received orders for Iceland – a temporary duty station prior to shipping out to Europe to fight the Germans. 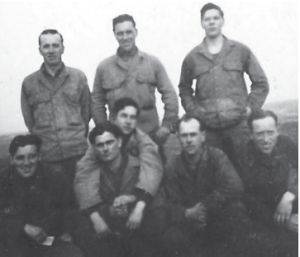 The trip began with an 18-day voyage to Liverpool, England and ended up at Keflavik, Iceland. Harvey knew he wasn’t in Lawrence any longer. The summer days at 65 degrees north latitude were nearly 24 hours long with the sun only dipping below the horizon for a few minutes each day. Winter was a different matter: twenty-four-hour nights with howling winds and bitter cold. Ropes had to be strung between Quonset huts to provide handholds for soldiers trying to walk from hut-to-hut.

Harvey remembers the people of Iceland being relatively pro-German. The Germans had only recently left Iceland and they had been instrumental in connecting many Icelandic homes to the hot springs for winter heating. In that cold, anyone who helps you stay warm is probably appreciated!

Unbeknownst to Pfc. Gibeau, the Allies were planning an early June invasion of France at Normandy. Part of that plan included moving Harvey – and thousands of others – to England in preparation for supporting operations in Europe after D-Day. Training and gunnery practice were over. It was time to put Hitler back on his heels.

Harvey left Iceland in early March of 1944 and made stops in Glasgow, Hereford, and Camp Foxley before arriving at the White Cliffs of Dover. While there, Harvey’s unit tried to shoot down several German buzz bombs headed for London. Even though the soldiers hit them with several 90 mm anti-aircraft shells, the bombs kept flying. Eventually they were ordered to stop shooting to preserve ammunition. The buzz bombs kept flying overhead all night, but many were duds and didn’t explode when they came down on London. Some were found and carefully dug up decades after the war. 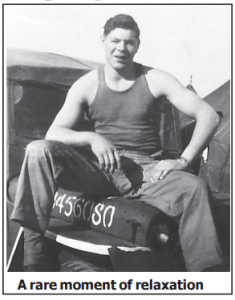 Harvey didn’t know when the invasion of France was scheduled to begin, but he had a hint in the early morning hours of June 6th when he looked up and saw the sky full of U.S. warplanes. Harvey noted, “I didn’t know the U.S. had that many planes. The sky was dark with planes. It was an amazing sight.”

Shortly thereafter, Harvey was on an LST bound for Normandy. He landed in France on D+8 days (June 14, 1944). Harvey remembers the backgrounds of the soldiers in his company. They were from Minnesota, Chicago, Arkansas, and Baton Rouge, plus a Quaker from Pennsylvania Dutch Country, and a full-blooded American Indian. Mix in a Lawrence boy and this company had some real variety!

As Harvey’s unit moved away from the Normandy beaches, he remembers seeing the pointed stakes the Germans put in the ground to impale U.S. paratroopers when they landed. French citizens buried many of the American paratroopers that died in the early part of the invasion, but kept the parachutes to make much needed clothing.

The 414th AAA Battalion moved with the Allied forces as they penetrated deeper and deeper into the French countryside. Harvey recalls that the lines between U.S. and German forces were disorganized and chaotic. It wasn’t a clearly marked boundary and, on several occasions, his group found themselves behind enemy lines. Once, he woke up to a real racket, only to find himself on the edge of a raging battle on an adjacent hillside. 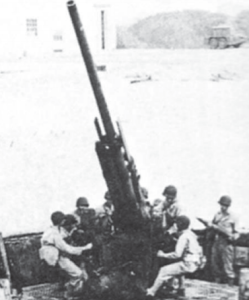 Harvey’s tour of France included Marseilles, Nancy, and Rheims. His artillery unit, equipped with 90 mm anti-aircraft artillery, traveled in truck convoys and once was strafed by German fighters. It happened so fast that there was no time to jump in a ditch or take cover. Thankfully, the unit suffered no casualties.

As the last days of fall passed, U.S. troops became more and more confident that the war would soon be over. Some even spoke about being home by early 1945. The Germans had a different plan. On December 16, 1944 the Germans launched their Ardennes Offensive – what we call the Battle of the Bulge. Well over a million men fought in this battle consisting of three German Armies, three American Armies, and three British Divisions. The Germans suffered 100,000 casualties. We suffered approximately 81,000 casualties, including 23,554 captured and over 19,000 killed. Both sides lost approximately 800 tanks. The battle lasted for six weeks.

After the first few days of the battle, it was going very badly for Allied forces. We were losing men faster than we could replace them. Every soldier was needed at the front. Even though Harvey was trained in anti-aircraft artillery , his country needed him to take on the role of an infantry soldier. He remembers thinking at the time, “I have a lot of worrying to do!”

There was no time for training. Two weeks into the battle, Harvey joined the fight as an infantryman. His unit still had its 90 mm guns, but now they were not pointed up but, instead, were pointed at German tanks.

He remembers four tanks probably less than a half-mile away that had their sights on his unit. The British troops that Harvey’s unit was supporting fired on the German tanks and they turned tail and ran.

On another occasion, Harvey was standing near a British military vehicle when, with no warning, a German armor-piercing shell hit the vehicle right between two seats. Fortunately for Harvey, the shell didn’t explode, but it did leave a nasty-looking hole right through two inches of steel armor plating. 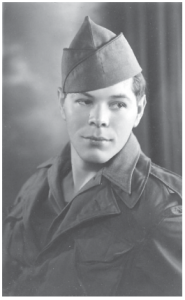 The weather during the first week of the battle was horrible. For over a week, U.S. aircrews couldn’t launch a strike or provide air cover. The first U.S. air operation in the battle occurred on Christmas morning. That same morning, Harvey volunteered for a mission to clear German forces from a section of a nearby town. He and two other soldiers approached a farmhouse and, not knowing if there were German soldiers inside, one of the men threw a grenade towards a window. It missed the window but made a pretty impressive explosion nevertheless.

There were, in fact, approximately half a dozen German soldiers inside the farmhouse at the time. They decided it was best to vacate the premises while they still had a chance. Harvey and his two comrades subdued and captured the Germans as they ran from the house. As this was taking place, Harvey noticed a group of German soldiers in a nearby field. U.S. warplanes strafed the field and Harvey and his two companions cap-tured another dozen German soldiers … making 18 prisoners in all. He has several souvenirs taken from the Germans captured that day – three medals and a small package of Chesterfield cigarettes – but he regrets not getting one of the German P-38 pistols that one of his fellow soldiers confiscated. For this operation, Harvey was awarded the Bronze Star.

Several days later, Harvey recalls witnessing the gruesome sights of dead German snipers still hanging in the trees and, on another occasion, seeing the burnt remains of several German soldiers in a pillbox who had been killed by flamethrowers several hours earlier. It is apparently the smell that makes the most lasting impression. “I really got to me,” he said.

With so many German prisoners taken in the Battle of the Bulge, the U.S. had to man numerous new prison camps. Harvey was assigned to supervise a section of a POW camp that housed captured German officers. They professed to not liking Hitler, but later Harvey found out that many of them had been members of the German Nazi Party since the mid-thirties – not exactly the makings of a pro-democracy group!

Harvey’s POW camp assignment continued until the end of the war in Europe. Shortly after victory was declared, orders came to free the German prisoners and allow them to walk back home to Germany. Many were reluctant to leave the camp, fearing they would be shot as they walked away. Maybe that is a reflection of what they would have done if the tables were reversed.

After VE-Day, Harvey went to Brussels to await return to the U.S. The magic day finally came in September 1945 when he boarded the Queen Elizabeth. The Queen Elizabeth was a fast ship and the return voyage took only 5 days. Harvey was discharged from active duty in November of 1945, after more than three years and three months of active duty.

On the return voyage Harvey met another soldier from Lawrence and they became friends. Upon reaching New York, his new friend invited Harvey to his home to meet the family. Harvey took him up on the offer and, as he walked in the door, he saw his friend’s sister, Flora, for the first time. They were married 8 months later and have been together now for nearly 60 years! At first, they took up residence in Lawrence, but have now lived in Methuen for the last 32 years. Although Harvey worked for several employers, he spent over 30 years with Borden Chemical in North Andover. He and Flora have two children, five grandchildren, and two great-grandchildren. 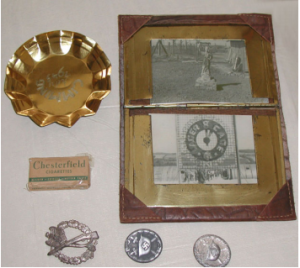 Harvey Gibeau, thank you for your service.

If you would like to nominate a veteran to be honored as a Valley patriot of the Month please email us at valleypatriot@aol.com or call 978-557-5413