By ValleyPatriot on October 8, 2008Comments Off on Hero in Our Midst – Haverhill’s John Katsaros and Code Burgandy 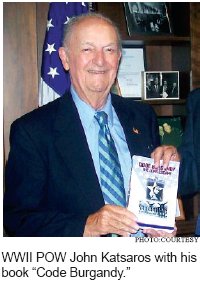 It is now possible for us to remember a true patriot. Sworn to silence for a period of time, even to his own family, John Katsaros can finally reveal his story of perseverance, courage, and heroism to us. We hear stories about freedom fighters. However, an airman of this magnitude, a true American from the “greatest generation,” one who can tell his own story, is among us and lifting the hearts of those who hear.|

The “greatest generation,” is quoted in Wikipedia as, “Americans who fought in World War II, as well as those who kept the home front intact during it. Some of those who survived the war then went on to build and rebuild United States industries in the years following the war.” John, still among us today, a poster child for the Greatest Generation, reveals his account of a man against the odds.

Katsaros, 85, of Haverhill, born and raised, is a World War II veteran. Initially planning to join the Navy as an aviator, his color-vision disqualified him from being able to serve as a Naval pilot. His determination compelled him to join the United States Army Air Force, making it possible for him to serve our country and make his story possible, in March, 1942.

John served with the 8th Air Force as assistant engineer, photographer and aerial gunner on the B-17 Flying Fortress. He served in the U.S. Army Air Force (8th Air Force), 1st division, 94th Bomb Wings, Deenethorpe, England, U.K., and the 401st Bomb Group, 612th Squadron. However, with his amazing credentials, it is the story of Staff Srgt. John Katsaros that now being told.

Having survived circumstances involving his bullet riddled aircraft, initially sent on a mission to Germany to bomb a primary aircraft factory; the story begins here as the plane was shot down over Reims, France. There were ten crew members on his B-17 aircraft, traveling on their 11th mission over Germany, March 20, 1944. Although many perished, John escaped death from his battered aircraft. John parachuted from a height of 25,000 feet, survived, but was captured as a POW (Prisoner of War) by Gestapo twice.

However, John escaped with help of the Free French Resistance, but it took numerous attempts until he would be out of the camp for good. Furthermore, he received medical treatment from Dr. Levy, who performed surgery on John’s injured arm. Dr. Levy is credited for saving John’s arm and is life. Once free from being a prisoner, John faced the Pyrenees Mountains as his new barrier to freedom. After climbing, John finally reached freedom in neutral Spain. However, hearing him tell his story lifts the heart and makes one reflect on the cost of freedom.

Normal interview processes change with a story such as Johns. There is only one question to ask, “John, tell us your story.” Then one’s life could slow for a moment and possibly be changed for lifetime. Katsaros’ book is the story of his struggle to freedom from being knocked out of the sky in Germany to his miraculous rescue. It is an incredible story of his dedication to duty and honor to his country.

However, John was not able tell his story to the world. According to the synopsis of his book, John was “under secrecy oath by the government and, under heavy penalty of punishment, was unable to reveal his story until recently when the oath of secrecy was lifted.” Now, many have heard, and many more must be told the events surrounding this American hero.

One who heard first hand, the Methuan Youth Core Founder Kathleen Corey explains, “Interviewing John Katsaros for MCTV’s show “Call to Serve,” was one of the highlights of our 60 and counting shows. Katsaros’ description and knack for story-telling brings the listener to a greater understanding of what it was like to be on a B-17 during WWII.

Our crew found it amazing that he was only 20 years old when he bailed out. The trials and tribulations that he had to endure to secure his freedom are truly something for the story books. That is why we all grabbed one of his books and had him autograph it. I personally felt it was a worthwhile read.”

In the fast-paced world in which we live, people like Staff Sgt. Katsaros, a true patriot, can bring the toughest to tears with his story of courage. His account can bring the world to a stop for moment causing us to reflect on life and freedom itself. Many have lost their lives, but some were left to remind us of why we live free. More than just commending remarks are owed to those who risked their lives for us. Many just want to tell the story of the sacrifices of freedom. Such is the case with Staff Sgt John Katsaros, who wants to take you on a journey through his book to reveal his story and open you eyes to the true definition of the “greatest generation.”

In Johns book, “Code Burgundy – The Long Escape,” the story comes with great detail and vivid account, which could not be conveyed in any article.

Tech. Sergeant James Moore is a recruiter for the United States Air Force and our Valley Patriot Hero Columnist. You can e-mail Sgt. Moore at James. Moore.73@us.af.mil or you can call him at 978-686-1464