By ValleyPatriot on July 3, 2006Comments Off on Hero in Our Midst – Joe Messina of Methuen – Hero in our Midst

METHUEN – Joe Messina was taking a shower below decks on the aircraft carrier USS Hancock after his Curtis SB2C Hell-diver returned from another grueling mission attacking Japanese shipping in Manila Bay.

Shortly after the ship’s General Quarters sounded, there was a tremendous explosion just over his head and men were yelling “fire.” The engine and remnants of a Kamikaze had just hit the flight deck after being struck by one of the carrier’s 5-inch anti-aircraft shells.

Joe got out of the shower in a hurry and went up to see what was going on.

There were Japanese planes everywhere attacking the U.S. Fleet. About a half-mile behind the Hancock and off to the right was the carrier USS Intrepid. A Zero, damaged by guns from the Hancock, veered towards the Intrepid and Joe watched as it hit the ship near the side elevator with a big explosion. Seconds later another plane dove into her followed by more explosions. The Intrepid burned for hours and started to list, but eventually recovered from the attack.

While all this was going on, Joe Messina’s parents back in Lawrence thought he was stationed in Pearl Harbor, far from the dangers of battle in the China Sea. Joe could not tell them where he actually was and what he was doing, so it was easy to write home that he was enjoying himself in Hawaii.

It was November of 1944 and Joe Messina was fighting the war as a radioman and gunner in a Navy Helldiver somewhere in the Pacific. He was part of Flight 1, a squadron of 12 planes assigned to Air Group 7 in Carrier Task Group 38.1, which consisted of four carriers, two battleships, and various cruisers and destroyers. He would go on to complete 12 missions, earning the Distinguished Flying Cross and two Air Medals before it was all over.

Joe was born in Lawrence in 1923 and attended the Leonard and Oliver schools, graduating from Lawrence High in June of 1941. On December 7th that year, Joe was watching a movie at the Victoria Theater when an announcement was made that the Japanese had just bombed Pearl Harbor. He ran home to tell his parents that the country was at war. At this time, Joe was working as a welder at Bethlehem Steel’s Quincy Shipyard and was subsequently declared exempt from the draft. Even so, in 1942 Joe tried to enlist in the Navy Seabees but was turned away because of the critical nature of his job.

In March of 1943 the Army decided it needed Joe regardless of his job and tried to draft him. While in high school, Joe had spent a year in the Citizens’ Military Training Camps – a predecessor to ROTC – and the Army wanted men with experience. He reported to the Boston Army Base and promptly told the recruiter: “I’m not going in the Army. Put me in the Navy or put me in jail.” Joe had learned through a friend that the food in the Navy was much better than in the Army and he was determined to eat well while serving his country. Fortunately, the Army recruiter relented and handed Joe over to a Navy officer who signed him up.

Joe was then sent to the Newport, R.I. Naval Training Station for four months of boot camp. Upon finishing, he signed up for the “Cooks and Bakers School” — still thinking about his stomach — but the Navy sent him instead to Radio School at the Naval Air Station in Jacksonville, Fla. This was followed up with Radar School training, and then in December Joe was sent to Naval Air Gunnery School in nearby Yellowater, Fla. Here Joe learned how to operate .30-caliber machine guns in the Douglas SBD Dauntless dive-bomber. He finished the three months of training with 62 hours of flight time and an appreciation for naval aircraft.

In January of 1943 Joe Messina was sent to the Naval Air Station in Wildwood, N.J. to await orders. At this time the Navy was forming Air Group 7 with the new Curtis SB2C Helldiver, a far superior plane to the Dauntless. In April he was assigned to Air Group 7 and was sent to Quonset Point, R.I. for further training. This is where Joe met his pilot, Lt. Dan Kalus, whom he would fly with on all future missions.

The new air group practiced formation flying, navigation, gunnery and dive-bombing while waiting for deployment. That came several months later when the aircraft carrier USS Hancock was launched from the Quincy Shipyard. Incredibly, Joe had worked on the Hancock as a shipyard welder before he entered the Navy. While serving on the ship, he could proudly point out sections he had helped to build. 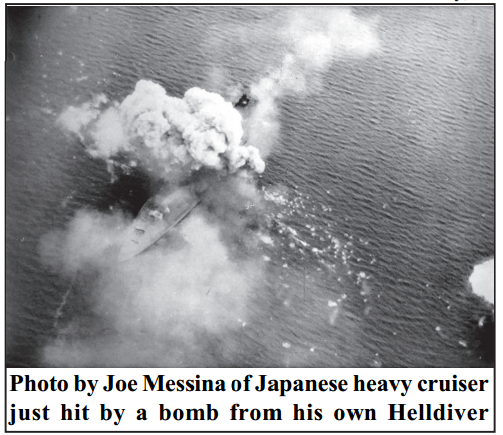 By August of 1944, the Hancock, with Joe Messina aboard, had completed a shakedown cruise and was headed to the Pacific war zone via the Panama Canal, San Diego and Pearl Harbor. The Hancock would eventually become part of Rear Admiral Bogan’s Carrier Task Group containing the carriers USS Wasp, USS Hornet and USS Intrepid.

On October 10, 1944, Joe saw his first action. He was part of a formation of six Helldivers which attacked three Japanese cargo ships.

They sank one and set the remaining two on fire. After Joe returned to the ship, he checked out a .50-caliber bullet hole in the plane less than three feet from where he was sitting. The war was now personal.

The next day the Hancock headed for the island of Formosa. On October 12th, the Helldivers took off to attack a chemical factory at Karenko, which was unknowingly defended by hidden 20 mm and 40 mm anti-aircraft guns. At 500 feet, Joe’s plane dropped its bombs when all of a sudden the left wing “blew up in our face.” A 40 mm shell had ripped a three-foot by three-foot hole in the wing, tearing away the altimeter, radio and flaps.

The crippled plane shuddered and immediately turned back towards the Hancock. Reaching the ship, the landing signal officer noted the plane’s predicament and called for the fire fighters and crash crews to be alert. The Helldiver came in fast and caught the third wire. As soon as the plane stopped, Joe was out quickly and moved to help Pilot Kalus get away from the plane. Fear of fire was always a great motivator. 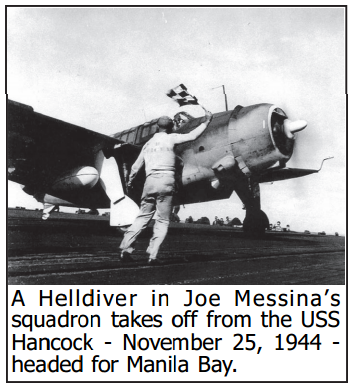 On October 25th, the U.S. Fleet located a large Japanese task force of 3-5 battleships, 4-6 cruisers, and at least 10 destroyers. Fifty-five fighters, fifty-five bombers and seventeen torpedo planes took off from the Wasp, Hornet and Hancock to attack the ships. At 1310 hours Joe’s flight sighted the enemy.

From 12000 feet Joe’s Helldiver started its decent through withering anti-aircraft fire towards a heavy cruiser. At 5000 feet, with the dive flaps closed, the plane hurtled downwards and was doing close to 400 miles/hr when it finally released its bomb. This was followed by a huge explosion on the fantail of the ship. Joe’s Helldiver had scored a direct hit. A moment later, Joe was able to get a spectacular picture of the damaged cruiser.

It was this mission which earned Joe the Distinguished Flying Cross. But the battle was costly for U.S. Forces. Out of Joe’s original squadron of 12 planes, only three made it back to the Hancock that afternoon. Some went down in the attack, some had to ditch in the sea because they were out of fuel, and some ended up landing on other carriers. The next day, fortunately, four planes that had landed elsewhere made it back to the Hancock.

Joe Messina went on to complete 12 missions in the Helldiver. Then, on November 30, 1944 the Navy decided that half of the squadron of dive-bombers would be sent home and the pilots would be retrained to fly fighters. Kamikazes were becoming such a menace that the Navy needed more fighter pilots to confront the threat. This meant that Joe’s combat flying days were probably over.

He was sent back to the states where he tried to hook up with some Navy B-24s and later on with another dive-bomber squadron. But by then the war was winding down, and Joe was finally discharged in September of 1945. He returned to Lawrence where he took up the floor covering and carpet trade. For many years he had his own business, the J.M. Carpet Service.

Several years after the war Joe was introduced to Marilyn Gallant at a dance held at St. Mary’s in Lawrence. They were married in 1950 and the two recently celebrated their 56th wedding anniversary. Joe and Marilyn have three children, Jay, Richard and Marie, seven grandchildren and one great granddaughter.

Joe Messina, we proudly thank you for your service to our country.

Final Note: Joe would like us to know that throughout his Navy career the food was always great.

He had made the right choice.