By ValleyPatriot on January 4, 2007Comments Off on Hero in Our Midst – Lieutenant Colonel Muriel Katschker, U.S. Marine Corps Reserve 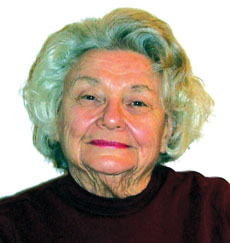 NORTH ANDOVER – Muriel Katschker remembers well where she was on December 7, 1941. She was with her parents listening to the radio when the regular programming was interrupted by an announcer’s voice saying the Japanese had just attacked and bombed Pearl Harbor. Instantly, the family knew this meant the country was at war.

At the time, however, Muriel was a young lady and had no idea that years later she would end up with a lifelong commitment to the Marine Corps.

Muriel Katschker was born and raised in Boston. She attended the city’s public schools and in high school became head cheerleader on the cheerleading squad. She was also active in the Girl Scouts where she eventually achieved the rank of Mariner. This gave her the delightful opportunity to sail on the Charles River.

In 1945, following high school graduation, Muriel entered Boston University to study nursing. After a year of medical instruction, however, she decided that she wanted to concentrate more on academics and transferred into the biology program. Muriel graduated in 1950 with a bachelor of arts in biology and subsequently went to work in the research department at the Boston University Medical School.

In June of 1952, as the Korean War continued, Muriel decided she wanted to serve her country by joining the armed forces. She chose theMarine Corps Reserve, she says, “because of its high standards.” She recalls that her mother cried at the enlistment news but her father, a former member of the Massachusetts National Guard, thought it was wonderful. 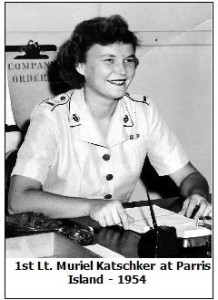 Muriel was sent to Quantico, Va. for 12 weeks of Officer Candidate School. Her training included the rigorous physical conditioning typical of the Marine Corps, but she recalls that the most important concept she learned was “the responsibility of being an officer.” After completing OCS, Muriel was commissioned a 2nd lieutenant and was given additional training in leadership. In late 1952 Muriel was selected to be a Marine Corps command officer.

From Quantico, Muriel was sent to Parris Island, S.C. and assigned to the Women Marine Battalion, Marine Corp Recruit Depot. Here she was the company officer in charge of training recruits how to march and work together, as well as educate them in the obligations and history of the Marine Corps. After eight months, Muriel received orders to become company commander of Women Marine Permanent Personnel Company, where she was responsible for the quality of work, health and living conditions of 100-150 women Marines. 1953 was also the year she was promoted to 1st lieutenant. 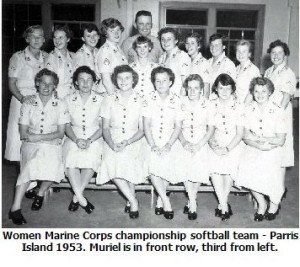 By 1954 Muriel’s two years of required active duty was complete. However, she asked for and was granted a three-year extension of service. She was subsequently given orders to become the inspector/instructor of the Women Marine Corps Reserve Platoon at the Wold-Chamberlain Naval Air Station in Minneapolis, Minn. Her platoon was part of the 4th Infantry Battalion Reserve and consisted of about 40 women.

These women were civilians who had signed up to train one weekend a month with a two-week summer camp, as Organized Marine Reservists. The women had the opportunity to work in most job functions except for combat related duties.

She traveled around the state talking with college women about careers in the Marine Corps, routinely made public appearances and was occasionally on the radio speaking about opportunities for women Marines.

In 1955 Muriel was promoted to captain. 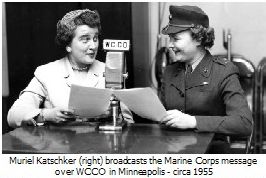 By 1957 Muriel had completed her active duty tour and subsequently became an inactive reservist. In August she entered Harvard University/Radcliffe College to study business administration and the following year she graduated with a one-year graduate certificate.

While studying at Radcliffe, Muriel joined the Marine Corps Reserve 2nd Infantry Battalion in Boston. Here she was commander of the Women Marine Reserve Company.

In 1959 Muriel once again returned to inactive status and now began a civilian career in human resources management, working for high-tech manufacturing and consulting companies. Then, in 1961, Muriel was asked to serve as secretary to the chairman of the 1964 National Conference of the Marine Corps Reserve Officers Association. This involved a three-year planning effort for the first Boston hosting of this important national conference. 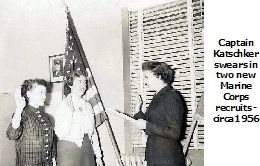 In 1962, Muriel also decided to join the Marine Corps Volunteer Training Unit 1-14 in Cambridge, Mass.; she was the unit’s administrative officer. The 1-14 met one evening a week to prepare and review reports or studies for the commandant.

During the decade of the 1960s, Muriel was always on “mobilization notice orders.” In the event of a national emergency, the commandant could activate her and she would have nine days to report to Norfolk, Va. for assignment.

Muriel Katschker is authorized to wear the National Defense Service Medal because of her military service during the Korean War years.

Muriel now volunteers her time to a number of local charities and organizations in the Merrimack Valley.

Muriel Katschker, we thank you for your years of service to our country.