By Tom Duggan on February 12, 2013Comments Off on Lawrence Councilor LaPlante Responds to Mayor Lantigua’s State of the City Address

“He did make mention during his speech that crime was the lowest in ten years. That’s not the case. It’s actually a 36% increase in felonious crimes since Lantigua has been in office. That increase was on his watch. That translates to 665 felonious incidents above average. That’s a huge impact on the people and the families in our city. In fact, if you look at the real numbers, over that 10 year period the mayor talked about, the highest three years of crime in the last ten years were during his three years as mayor. This includes felonies like, murder, rape, armed robbery, aggravated assault, auto theft, burglary, larceny over $250.” 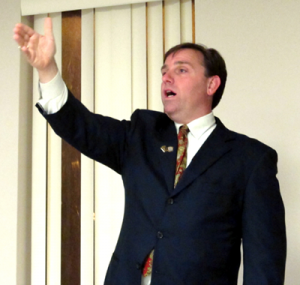 We asked LaPlante what he would have said if he could deliver an official response to the Mayor’s Address.

“The first thing I would say is what I said during public participation, that our property taxes are increasing, while our house values are dropping in Lawrence, while services are being reduced for our citizens. According to the DOR  (Mass Department of Revenue), our average tax bill in Lawrence increased 19%, and house values dropped by 27%.

I was looking at the Mayor’s past state of the city addresses and they are on-line, all he did was just regurgitate old speeches and make them sound as if they are new. There was nothing new here. Nothing new at all.

LaPlante said he was not completely critical of Lantigua’s speech, citing a few things he did like.

The legislation died in Boston, but just today State Representative Marcos Devers sent me a revised change to legislation that he thinks will pass the Ways and Means [committee] and get to the governor’s desk.:”

Currently the law in Massachusetts calls for a $300 fine per incident if someone is caught illegally dumping. The new law would have those fines go up to five times whatever it cost to clean up the mess left behind.

“So if you did dump illegally and you left a big mess behind, and it costs our DPW $1,000 to clean it up, under the new  law you would be fined $5,000. That’s pretty significant. I think that makes it more of a deterrent and the best part of this legislation is that the money we collect in fines will go into a dedicated account that can only be used for illegal dumping issues. It would go to buy equipment, cameras, and pay personnel, things like that.”

During Lantigua’s address he mentioned state grants to get more cameras in the City of Lawrence to catch illegal dumpers, we asked LaPlante if he was concerned about civil liberties with all the new secret cameras Lantigua is having installed all over the city.

“Well, the commonwealth does have that kind of initiative to lend cameras to communities and it works pretty well.  What we want to do is follow their example, but I’m not going to say where we are putting the cameras because this is in place to catch people who are illegally dumping. If people know where the cameras are they will just dump somewhere else and what we want to do is catch them. I understand the argument of ever expanding government but this is a kind of enforcement that’s really necessary.”

Crime and Unemployment up Under Lantigua

Despite what LaPlante says he liked about Lantigua’s State of the City Address, the South Lawrence City Councilor says that what was not in the speech was far more telling

“Unemployment in Lawrence is the highest in commonwealth at 14%. He didn’t talk about that, and it’s a major issues for the people of this city. What has he done?

“He did make mention during his speech that crime was the lowest in ten years. That’s not the case. It’s actually a 36% increase in felonious crimes since Lantigua has been in office. That increase was on his watch. That translates to 665 felonious incidents above average.

That’s a huge impact on the people and the families in our city. In fact, if you look at the real numbers, over that 10 year period the mayor talked about, the highest three years of crime in the last ten years were during his three years as mayor. This includes felonies like, murder, rape, armed robbery, aggravated assault, auto theft, burglary, larceny over $250.”

“Part of the problem is that while he is misrepresenting the truth about the crime in Lawrence, the citizens of Lawrence and the surrounding communities that are paying our bills are paying for two indicted police officers a combined $200,000+ to stay home. That money could be used towards paying officers patrolling our streets protecting us and reducing crime.”

Councilor LaPlante called for the resignation of the Mayor last year, the only city councilor to do so and one of only two elected officials to do so in the city. Asked if he still believed Lantigua needed to resign LaPlante laughed.

“What? Yes. I still think he should resign. He should have resigned yesterday. He has done little to help out the people of the city. Loo, Lawrence still has a very dark cloud hanging over us. We are asking our state delegation to represent us and do the best they can for us by way of bringing in money and helping us fix the problems in Lawrence, meanwhile they are afraid to do anything to give Lawrence assistance while Willie is in office.”

“I mean he mentioned distractions during his speech, basically pointing to the people who criticize him and his administration, but those “distractions” as he calls them,  are all self-inflicted. When you decide that you’re not going to follow the law and not pay your fines for campaign finance violations like everyone else, when you decide not to report the money you raised for your campaign, when you are hiring friends and family and staff the city with unqualified people because they worked on your campaign, yes, most of the criticism he received on that stuff is self-inflicted. What we need is someone to get beyond he surface and get governing this city. That’s hard to do when you are shooting yourself in the foot every single day.”

“The last thing the mayor should be doing is bad mouthing the caliber and dedication of Francisco Urena. If that was his intention, shame on him. I am not taking anything away from Jamie Melendez, he’s doing a good job. The mayor could have praised the Job Melendez is doing without pulling down the person he replaced, that would have been the professional thing to do. Francisco did an amazing job representing the Veterans, so much so that Tom Menino hired him in Boston.”

“As I said in my remarks at the public participation portion of the meeting, there are a lot of questions that Lantigua didn’t bother to address. Like: what are we doing to bring some stability and tax equity to the citizens of our city?  Even with paying more taxes our Police Department remains understaffed. When the Mayor took office we had about 145 police officers now we are down to 120.

Understandably, the crime rate was still high in 2012 with the understaffed police department. Crime is still higher than what it was before 2010.  We are paying the salaries of 4 officers even though they are not working.

The mayor can suspend without pay two officers that are indicted, but he is paying them, or rather we are paying them. Why isn’t he doing that and saving the city $200k?  Unemployment is over 14%. I have to yet hear the mayor talk about his plan to help our neighbors who are unemployed and looking for work.   What is the signature economic development initiative in 2012?

How many jobs were created in 2012 due to the city’s initiative?

What is the game plan to retain the fire department personnel when the safer grant expires?

What is the game plan to more fully staff our police department?

What is the game plan to utilize the empty and abandoned Bailey Street and Ames Street fire stations?

Last summer, the Community Development Department met with interested stakeholders and citizens to work on reviving the Canal Street area. What has happened with that project?

The mayor has embarrassed our city repeatedly. In 2012 he has continued hiring unqualified supporters to key DPW positions. What is being done to repair the city’s image, and to stop making our government the laughing stock across the state?”

“I am not going to say that everything Mayor Lantigua has done is wrong or bad but when you weigh out the good things going on as the result of his efforts as mayor, with the additional problems he has created for the city it’s pretty clear he has done far more damage and made the conditions of the city far worse in his three years as mayor.”