The Lawrence Exchange Club held their annual Police, Firefighter and EMT of the year awards last night honoring first responders in the valley. Police and Fire Chiefs from Lawrence, Andover and North Andover were allowed to present each honoree with a plaque and explain to the public why each officer was being honored.

At about 1:40 AM auxiliary Chief Jay Jackson reported that shots had been fired near the “Auto Zone” at Broadway and Cross Streets.

Thanks to his careful description of a van speeding away toward Manchester Street, Officer Bussey was able to identify the same vehicle seconds later and his request to pursue it was quickly granted.

Bussey was calm and controlled as he reported the pursuit, which ended shortly just off Current Hill Road where the van collided with grave-stones. Here, damage to the door forced the suspect driver to exit from the passenger side. Officer Bussey Illuminated the scene with his cruiser and stationed himself at the rear passenger side of the van where he could observe without being seen by the driver or anyone still in the van.

From there, he ordered the suspect to get on the ground, which he did after running back and forth in a panic.

Officer Bussey waited for backup and then, safely secured the suspect while the van was being searched. The search revealed a 40 caliber Glock pistol on the driver’s side floor. 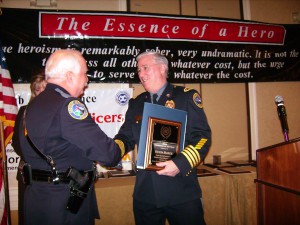 from Engine Company 3, and Ff. EMT Brian Wright and Ff. EMT Ryan Beal of Ambulance 2. Their combined efforts, in conjunction with the Lawrence General Advanced Life Support Paramedic Unit, saved the life of a person choking a the Chateau Restaurant last May 4th.
Both Andover Fire/Rescue teams were dispatched at 12:31 PM from the emergrency report of a choking patron. Upon arrival, the Engine 3 team replaced a citizen who had been performing CPR and made a thorough assessment of the patient. Quickly, they applied the ambu-bag and oxygen while Ff. Cahill prepared a nasal airway for insertion. Within 2 minutes, Ambulance 2 arrived. Ff. EMT Morgese determined that a piece of meat was obstructing the patients airway almost completely. He radioed the ALS Paramedic unit en route describing the nature of the life-threatening obstruction. The ALS Paramedic unti arrived momentarily and they were able to employ specialized equipment to clear the airway, whereupon the patient was intubated and transported to L.G.H. by Ambulance 2. Thanks to their rapid response, assessments and accurate application of appropriate life saving techniques, the patient recovered consciousness within minutes of arriving at the hospital and the tube was removed. Andover Fire/Rescue is proud to recognize these five professionals.

He has sponsored regional Fire Investigation Training and attended the National Fire Academy in Maryland. Ff. Graham is part of the NEMLIC STARS program that provides intervention and assistance with school emergencies, including bomb threats, school violence and other issues.

Both of these firefighters represent the ideals of service, training, competence and dedication that make the North Andover Fire Department successsful and trusted by those we serve.

Lawrence Fire: Lawrence is pleased to recognize a lifetime of service by Ff. Gary Clement who has just retired after 32 years. Gary has always performed the duties and responsibilities that are essential to the success and recognition of the quality of our Department. As our respresentative he volunteered to coordinate funerals and wakes of many retired and active firefighters.

He made arrangements for Honor Guards at wakes and for Color Guards and pallbearers at funerals. Clement would personally contact the families of the deceased and made sure their wishes were followed and he represented the Department’s caring for them and for the fallen. We appreciate this opportunity to honor Gary Clement, and we will miss his contributions to the health and success of the department.

Andover Police: Andover is proud to recognize Officer Kevin Burke, a 36 year veteran of the department. Kevin is currently our Court Liaison/Evidence Technician Officer. He has specialized in crime scene analysis and fingerprint identification. In his career, he has collected and processed evidence in nearly every crime scene or incident in Andover. He is now the only person in the U.S. to hold all three of the International Association for Identification’s certifications as Senior Crime Scene Analyst, Ten Print Examiner and as Latent Print Examiner. In addition, he also sits on the National Scientific Working Group (SWGFAST) that is establishing standards and guidelines for all crime scene analysts. His extensive work has earned him both local and national awards and citations. Officer Burke’s expertise has assisted with many investigations and identifications, reslulting in numerous arrests for literally hundreds of crimes. He has always respresented the Department with excellence and the has been antionally recognized for his crime scene and fingerprint analysis. We are proud to name Kevin Burke our Police Officer of the year.

North Andover Police: North Andover is pleased to honor Sergeant Timothy Crane, Detectives Daniel Cronin, Thomas Donovan, Robert Barter and Sean Daley, and F.B.I. Special Agent Margaret Cronin with whom they cooperated in the investigation of an October 27th bank robbery. On that day, a man entered the downtown Sovereign Bank office on Main Street where he demanded and received money from a teller made fearful by his angry and agitated demeanor.

The sustpect fled and a widespread investigation ensued, including other officers and K-9 units. The investigation led officers to believe the man came from the area and that he had committed larceny at the nearby CVS store a day earlier. Forensic investigators discovered that the theif had left palm prints on the bank counter.

The invesigation continued into the next week and, on November 4th, a child custody inquiry was fielded by Sgt. Crane. When he referenced the child’s father through the RMV system, Crane recognized a similarity with surveillance photos of the bank suspect. With the help of the F.B.I. Bank Robbery Task Force, a warrant was obtained and the suspect was ultimately arrested in Dorchester. The palm prints and other evidence resulted in indictment and conviction and ths person is now serving his sentence. The Department is pleased to recognize the professionalism and collaboration exibited by its officers and by Special Agent Cronin in the prompt conclusion of this case.

At that time a “911” call reported an unresponsive 18 year old male who had collapsed after playing handball. Upon arrrival, they found Lawrence Police Officer Jeff Malenfant applying CPR. Quickly assessing the patient’s condition, the team employed the Automated External Defibrillator and shocked the patient’s heart into a life-sustaining rhythm.

His heartbeat and breathing were restored. Subsequetnly, he was transported to Holy Family Hospital and later, Med-Flighted to Mass. General Hospital. He walked from the hospital two weeks later. The entire Patriot’s team is proud to work with EMTs Cote, Leavitt and Pappas.