By Tom Duggan on August 24, 2014Comments Off on Methuen’s Brittany Baldi PART II Doing What You Love to Do 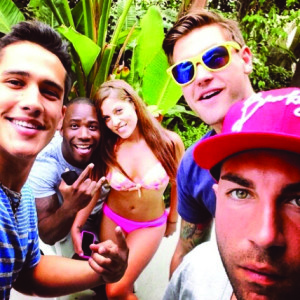 Last month, Methuen’s Brittany Baldi talked about how she started in show business and her time on MTV’s “Are You the One” (AYTO). Shortly after our interview, Baldi was flown to Los Angeles to shoot an update of the show in a “where are they now” type of TV reunion. The show will focus on Amber and Ethan (one of the perfect matches) who are now engaged. Amber is currently pregnant. The cast of the show held a baby shower and celebrated on a show that airs on September 22, 2014 on MTV.
Here is part two of our interview with Brittany:

Has your appearance on MTV given you an advantage on getting other acting or modeling jobs?

“Since the TV show I wouldn’t say MTV has given me an edge. Honestly it’s almost like I was never on the MTV show. I have more than 26,000 followers on Instagram and Twitter and I love my fans. It’s been a great experience, I learned a lot, but as far as getting work from the show? No, not at all.”

Brittany did another TV show called “The Choice”. It aired on Fox and was a one-episode thing back in 2012. She also appeared on “Is She Really Going Out With Him?”

“I just want to have a job where I can wake up every day and be in love with it. I know a lot of people want to be famous. To me it’s not about that. I don’t care if I’m famous. I want a job that doesn’t seem like a job. Sure, being in the spotlight is great, but at the end of the day I want a job that is fun.”

“I currently do a TV show that airs on NESN at 9:30 on Saturday mornings called Wicked Bites. The show is run by Pat and Scott Whitley, they are awesome guys. I love them to death. I go in and do their radio show on Sundays sometimes. Their TV show focuses on local eateries, food and restaurants. We actually just shot a segment at Mann Orchards the other night. I love that job, that’s my dream job. I want to do TV, entertainment, and/or sports hosting. I’d love to work for an NHL network like EPSN, maybe do the red carpet for “E!”, I’d really love to do that. That’s actually my long term goal.”

What do you do for Wicked Bytes?

“For Wicked Bites I focus mostly on their sports segments. I get to go to charity events and I’ve interviewed everyone on the Bruins roster, the Red Sox, some of the UFC fighters like John Howard. I actually got to get in the ring with him and box. It’s a really fun experience, I love it. Pat and Scott have been really good to me, it’s a dream job. It’s not work. I show up and I forget that I’m even at work. This is what I want to do full time. This is what I have been working towards.”

Brittany said that young people looking to get into show business have to have a positive mindset.

“If you don’t have a positive mindset, you aren’t going to get anywhere. Self-esteem is huge. You need a backbone; people around you are constantly pushing you. But you also have to be willing to take the bumps and the bruises. If you are going to go into that casting office, you have to go in knowing that you are going to get 100 no’s before you get that big “yes”. You can’t get down on yourself. You have to realize there’s really tough competition, and a no today could be a yes tomorrow, because sometimes the people cast in a show or a movie end up not working out and if you have a positive attitude, people are going to remember you. You might get a call from someone you thought rejected you. It’s all about keeping at it and not getting down on yourself.”

“I’d also say, staying in school is really important. Even if your not in school, if you are working a family business or trained for a profession, you always have to have something to fall back on. If you don’t have that and you don’t make it big, what the hell do you do then? My dad used to always tell me to make sure I finished my degree because you don’t know what’s going to happen.”

“I think the biggest advice I can give anyone is, do what you love to do. Don’t become a doctor just because you know they make a lot of money. Become a doctor because you truly want to help people and it’s something you will love to do. I can tell Tom, you love what you do in journalism because the way you are asking your questions. I can tell you really are interested in getting to know me and hearing my story. To me that’s what success really is because, how many people don’t get to do what makes them happy?”

Are You The one, Brittany Baldi, massachusetts, Methuen, MTV, VH1