By Christine Morabito on May 24, 2011Comments Off on Protesting the Protesters; Unions and Anarchists Exposed 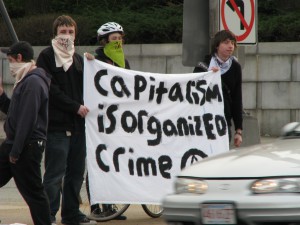 Just after the rally began it was disrupted by a motley crew of about 25, claiming to represent various public sector union groups. They muscled their way to the front of the crowd where they attempted to drown out Tea Party presenters with bullhorns and hate-filled chants. They also held professionally printed signs and an enormous banner which obstructed the view of the stage. Far be it from me to deny anyone their right to free speech, but why were they allowed to interfere with the rights of the Tea Party? After all, it was the Tea Party – not the unions – who went to the trouble of obtaining a permit for the event.

I was extremely disappointed in the behavior of the normally commendable Boston City Police, who claimed they were powerless to intervene. By doing nothing they sent a strong message. They merely created a human shield between Tea Partiers and the obnoxious protesters, making one wonder if they were protecting the patriots from the union thugs or the other way around. Unfortunately, by allowing the protesters to disrupt the rally, it became apparent that the latter was the case.

Reverend Paul Jehle took to the stage and attempted to lead the audience in prayer. He politely asked the union representatives to observe a moment of silence. They not only refused, but began chanting — apropos of nothing –“Racists, sexist, anti-gay, Tea Party bigots go away!”

Apparently, the unions did not count on the tenacity of the presenters, particularly the emcee, Michael Graham who exposed them for being “community organized” and admonished them until they eventually dispersed. Local radio hosts Todd Feinberg and Jeff Katz also valiantly defended the Tea Party’s honor. The other speakers, though unaccustomed to this level of union intimidation, handled themselves with grace and confidence as they spoke about legitimate Tea Party issues like the Fair Tax, balancing the budget and repealing both the Death Tax and Obamacare.

I have it on good authority that at least two of the “union protesters” were actually recruited from the Pine Street Inn homeless shelter to pose as union members. Judging by the state of their dress and lack of dental hygiene, I suspect that there were more than a few. How they were compensated is yet unknown, but I believe Nancy Pelosi has finally found her “astroturf.”

Here’s my question: Shouldn’t the real union members be furious that they were replaced by homeless people who will work for less? Where’s the outrage? As Tea Party member, Patrick Humphries opined, “It’s good to know that in this bad economy, even the unions are cutting costs.”

Headlining the rally, Governor Tim Pawlenty, known for his successful budget slashing policies in Minnesota received a warm Boston welcome as he spent time meeting the crowd and signing autographs.

The Tax Day festivities continued on April 18 with the Greater Lowell Tea Party rally at Shedd Park Pavilion. In attendance was a small, but faithful crowd of about 100. Patches the Clown entertained the children while speakers educated folks on various taxpayer issues.

Later that day the Worcester County Tea Parties held a rally and pig roast at Lincoln Square with a crowd of about 400.This time a radical group of anarchists, waved their freak flags of protest. They were predominantly college-aged, dressed either in black or SEIU t-shirts — with bandannas concealing their shockingly pierced faces. Frankly, I fail to see how dressing as leftist rioters helps their cause, but that’s just me. These are the same gullible youth who idolize the Marxist Che Guevara while completely ignoring the fact that he was a blood-thirsty, sadistic hit-man for Fidel Castro. If they lived in Europe they would, no doubt, feel right at home with the godless deviants overturning cars, starting fires and vandalizing private property. Their fantasy of a violent revolution is both naïve and dangerous. Luckily, they remain on the fringe.

Unlike the Boston Police, Worcester’s finest kept the radical revolutionaries across the street from the rally lest they disturb free speech. For that, they should be commended. The always classy anarchists reacted by swearing, making vulgar hand gestures and waving their offensive signs complete with profanity.

Why are these two groups of protesters so threatened by the Tea Party?

The public sector unions, while enjoying extravagant benefit packages paid for on the backs of average citizens are now being asked by those same overburdened taxpayers to make a modest contribution. To this they are vehemently opposed. Unlike private unions, public unions negotiate for benefits, not with those who actually pay for those lavish perks, but with government bureaucrats who they continue to re-elect through their enormous campaign contributions. It’s about time the taxpayers had a seat at the table.

As for the young anarchists, who have yet to experience a real job, live in the real world or pay real taxes, well, they are just too immature to know any better.

Please join us at our next Merrimack Valley Tea Party meeting: Wednesday May 18th @ 7 p.m.