By Tom Duggan on December 28, 2012Comments Off on Son of Dead Holy Family Patient Takes Aim at LeapFrog Group Rating of Hospital

In what is a continuation of his efforts to seek justice for his mother, Helen Marie Bousquet, Brian Evans will stop at nothing.

Evans originally contacted the “LeapFrog” group, who claims to be a non-profit organization (the executive salaries are displayed no where on their website). It’s CEO, Leah Binder, wrote Evans a letter advising him that most of the data that led to their recent rating was from 2011 data, and nothing current.

Evans initiated that letter after an hour long conversation with Binder, who told him to “go after them,” he says. Evans then advised her to “put what you are saying in writing.”

Delicately as she may have, she wrote the letter (see letter) to Evans, advising him that the scores were from long ago, and not recent. Evans then went public with the letter (HERE)

Just eleven days after writing that letter to Evans, and after Evans then went public as it pertained to her letter, Binder then provided new quotes that appear on the news section of The Holy Family Hospital.

You may see that press release HERE

Binder, just a week before in an email, asked Evans to come visit her offices, until it was learned Evans went public with the letter she wrote him.

In response to Binder’s about-turn, Evans has filed a complaint with the IRS EO Classification unit of the IRS, which determines a 501 (c)’s eligibility. 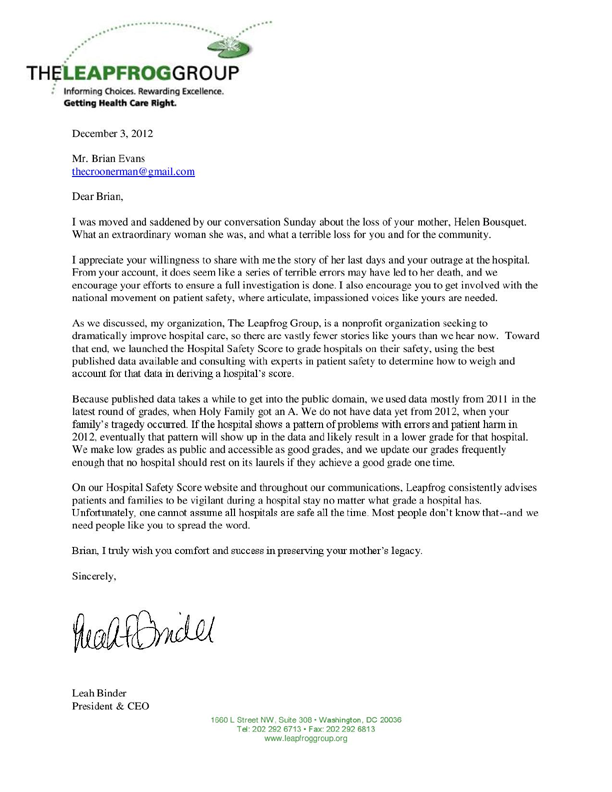 “Why would a non-profit organization all of a sudden make it an issue to get a press release up on the Holy Family Hospital website, a Steward Health Care System Hospital, just eleven days after both inviting me to meet with her, and sending me a letter that supports my efforts? Answer…pressure from above. That’s my opinion, and I believe the facts speak for themselves.”

The LeapFrog Group, which claims to be a non-profit, does not reveal salaries of it’s employee’s. One website, http://www.indeed.com/salary/The-Leapfrog-Group.html, claims that the average employee receives about $94,000 per year.

Meanwhile the Department of Health has advised State Senator Tarr’s office that they are about to wrap up the investigation into what happened to Brian’s mother. However, Evans then complained to the senators that none of the witnesses, family and friends who were at the hospital ICU the night she died when Evans claims they all overheard doctor’s and nurses claim that his mother should have been monitored, had been contacted by the DPH. Evans was also upset to learn that the same state investigator was also the investigator for CMS (Centers for Medicare and Medicaid Services) on the federal level.

“How is there federal oversight when you file two separate complaints, one for state, and one for federal, only to have the both of them investigated by the very same person? The conclusion has no second pair of eyes,” says Evans. “It bewilders my mind. It’s no wonder people don’t take it as far as I have. It feels like they are acting as advocates for the hospital’s. One investigator asked someone else this also happened to why they weren’t putting their own CPAP’s on if they have sleep apnea. How about…because they just got out of surgery and are still on morphine. Is that a good enough reason?”

“The thing that people involved in this have to understand is, this is my mother this happened to. I will go to the end of the Earth to find justice for her, and I will go after anyone who gets in the way of that, or who attempts to put blame on my mother for expecting treatment…in a damn hospital.”

Meanwhile, The Boston Globe wrote a blistering story about nurses protesting The Holy Family Hospital in yesterday’s (12/23/12) edition of their newspaper, which you may view here:

“I wonder how LeapFrog feels about their December 14th “emergency rating” when this comes out just 9 days later,” says Evans.

Evans will soon be appearing on CNN to discuss what happened to his mother. His mother’s website, www.helenbousquet.com, has a detailed listing of what he’s doing to seek justice for his mother, along with other information about the matter