By Tom Duggan on September 1, 2004Comments Off on Uncertainty Looms For Veterans Stadium

LAWRENCE – After more than thirty years of neglect and empty promises by elected officials, the Veterans Memorial Stadium has finally become a priority for government leaders in the city.

In an unusual display of cooperation, Mayor Michael Sullivan and the Lawrence City Council worked out a $30 million capital improvement borrowing plan, which included more than $6 million to completely renovate the stadium. The Council unanimously supported Sullivan’s bond proposal. The Stadium Restoration Committee (under the leadership of Historical Commission President Lee Balcom) met regularly to choose an architect and work out the details for use of the stadium by sports teams to bring in revenue for the city.

As of March of this year, it looked as though the Veterans Memorial Stadium project was well on its way to a July 2004 ground breaking. Sullivan said at the time that he anticipated the stadium project would be completed by the spring of 2005. But when July ’04 came and went, Sullivan says that he called a meeting with Planning Director Fred Carburry and City Attorney Charles Boddy to find out why work had not yet begun on the structure.

“I called them into a meeting and was told that a contractors’ association had filed a complaint,” Sullivan said. “They were threatening to get a court order to shut down the project because of a residency ordinance which mandates all city construction projects over $100,000 must include Lawrence workers for 30% of it’s workforce.”

Sullivan said that he was concerned about moving the stadium project forward and, to prevent a shut down of the project, he sought a legal opinion by the Attorney General’s office.

“The AG’s office said the language was probably unconstitutional and recommended we take the residency language out of the bids for the contract,” Sullivan said. “So that’s what I did. I wasn’t going to have this project pushed back another year. The people of Lawrence have waited long enough.”

Instead of moving the project forward, however, Sullivan’s decision to remove the residency language sparked outrage among City Councilors and local unions who had anticipated receiving jobs on the $6 million project. 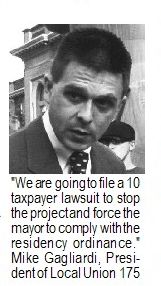 Mike Gagliardi, president of Local Union 175, immediately started to organize a demonstration outside city hall, calling Sullivan an “incompetent mayor” and vowing to campaign against him in the next election.

“I supported Mayor Mike the last time around but never again. The unions will stand strong against him if he decides to run again. He obviously doesn’t care about the people of Lawrence who want to work,” Gagliardi said.

More than 200 people crowded the sidewalk across from Sullivan’s office to protest the Mayor’s decision to remove residency from the stadium project, bearing signs that read “Lawrence Jobs for Lawrence People” and “Where is Mike Sullivan!” Demonstrators also set up an inflatable rat, towering twelve feet in the air with a sign that read “Jobs for Lawrence residents”. Organizers said the rat represents Mike Sullivan.

When union president Gagliardi rose to speak to the protesters he promised a ten taxpayer lawsuit to “halt the construction project until Mayor Sullivan puts the residency language back into contract and sends it back out to bid.” Sullivan says he has no intention on doing that.

“If the union wants to halt this project, and tie it up in court, nobody works,” Sullivan said. “Is that what they want for their workers? I don’t see how that solves anything. I will be sitting down with the contractors once the bid is awarded and personally make sure that Lawrence residents represent at least 30% of the workforce but we are only talking about twenty five workers total on this site. I just want the stadium fixed and I’m surprised that the Council has taken this route.”

Sullivan said that he believes the union protest was orchestrated by city councilors who “are angry because they blame me over the Jimmy McGravey situation. I really believe that. This is all politics. Just take a look at who was out there with the protesters mugging for the camera, these guys are all running next year.”

(Former City Clerk, James McGravey resigned a week earlier after it was revealed to the press that he had used city computers ‘inappropriately’) 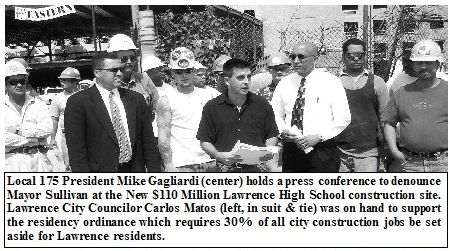 But Gagliardi said politics had nothing to do with it and added that it was Sullivan who is responsible for any halt in progress on the stadium.

“Look, it’s this simple,” Gagliardi said, “there is a residency ordinance that says 30% of the workers have to be Lawrence residents. The Lawrence City Council voted to rebid the project with the residency language after Sullivan took it out. It makes no sense for him to continue this project without the language in the bid. If we have to, we will put a stop to this and every other project in the city until Sullivan complies with the law. I have an obligation to protect Lawrence workers and I am going to do just that.”

Lawrence City Councilors who attended the protest outside city hall echoed Gagliardi’s position using even more harsh language in what looked like a political campaign rally.

Councilor At-Large Marcos Devers, (who has already declared himself a candidate for mayor) said he was standing by Lawrence workers who “just want to put food on their table.” 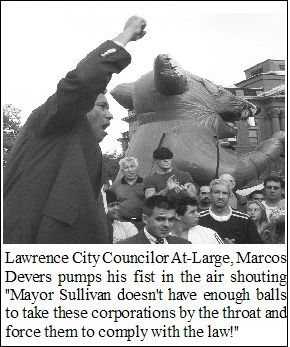 Devers pumped his fist in the air and declared that “Mayor Sullivan doesn’t have enough balls to take these corporations by the throat and force them to comply with the law! All we see is his cronies getting all the work, and what do we get? We get nothing!” Councilor Matos blamed Sullivan for the high unemployment in the city, saing that Sullivan had been absent on the $110 million Lawrence High School project where councilors estimate that only 5% of the workforce are Lawrence residents.

“We have $110 million invested in the new high school and at least $200 million, I repeat, $200 million for other projects in this city,” Matos shouted to the protesters.

“We have a $30 million water project being constructed. We have a $30 million capital improvement project that’s being put forth. These represent employment, this represents the abilities for a quality of life that all of you deserve today. And this is what we want. We want a meager .30 cents on the dollar, not 100%, not even 50% like other communities. Just 30%”.

“We just received 23 million dollars from the federal government, for the Gateway project,” he continued, “which insists upon 200 new jobs for Lawrence residents. So when the mayor says that the residency language is unconstitutional I would say those other projects would also be unconstitutional.”

Matos vowed to support the union in shutting down the stadium project until the residency language was put back into the bids.

Later that night the City Council voted to send the project back out to bid with the residency language included, but within days, Council President Patrick Blanchette admitted that the vote was not legal because they have no authority over contracts or enforcement of ordinances. 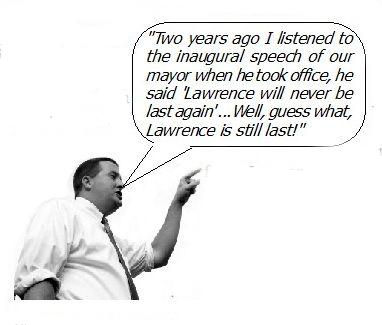 At the rally President Blanchette urged the crowd of Lawrence workers and union members to “stay involved”.

“Right now we want full compliance with the law,” Blanchette told them. “The fact of the matter is, we do not have 30% for Lawrencians on the major projects going on in the City of Lawrence. The new high school project is the largest high school project in the country. We only have about 5% on that project. Two weeks ago, the mayor ordered the Office of Planning and Development to remove the residency language from the stadium project. That’s unconscionable. It is intolerable.”

“This is a serious, serious issue. Two years ago, I listened to the inauguration speech of our mayor when he said Lawrence will never be last again. Today, we have the highest unemployment rate in the Commonwealth. Well, guess what? Lawrence is still last!” Councilor Israel Reyes also addressed the protesters in a show of unity with his fellow councilors and the unions.

“There is a way to make everyone happy here and that’s to sit down with the developers and get them to voluntarily agree to hire 30% of their workforce from Lawrence,” Sullivan said.

“The problem facing the people of Lawrence is that if we do not break ground while the warm weather is here we are looking at April before we can start the project. That means we are looking at another year before the project is complete. Short of a judge ordering me to jail, this stadium restoration project is moving forward and if the union wants to take me to court then so be it.”

As for the Lawrence High School project, Sullivan admits he dropped the ball on the residency issue saying he will sit down with all the subcontractors to make sure they comply with residency.