By ValleyPatriot on December 20, 2013Comments Off on Valley Patriot of the Month – HERO IN OUR MIDST: Sergeant Thomas F. Siopes, U.S. Army 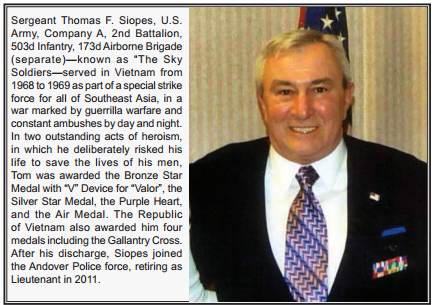 In the early dawn hours of March 25, 1969, in the rice paddies of South Vietnam, near Bong Son, in the province of Binh Dinh, 22-year old Sergeant Thomas F. Siopes, Company A, 2nd Battalion, 503d Infantry, 173d Airborne Brigade (separate), was leading a patrol on a “search and destroy” mission to clear out “Charlie,” the Viet Cong, before his entire platoon advanced into the area.

Tom led his men swiftly through the rice paddies. If ambushed, they would have no cover. Tom knew the enemy’s hit-and-run tactics, their surprise attacks that never let up, day or night.

Suddenly a massive volume of small-arms fire shattered the silence, pinning Tom and his squad to the ground. The volley of gunfire was intense. It lasted what seemed like an eternity.

Tom Siopes saw his point man, Franklin Aquino, go down. As bullets whizzed past his head, Tom half-crawled, half-ran to the front of the column to help him. He hit the ground several times, dodging the bullets.

On reaching the wounded paratrooper, Siopes found him having difficulty breathing. A bullet had penetrated the man’s chest and exited through his back, causing one lung to collapse. Blood was flowing out. The “sucking chest wound” was life-threatening. After quickly applying first aid, Siopes then shielded his wounded comrade with his own body and dragged him about 100 yards to the nearest combat medic. As the enemy began retreating, he prepared a landing zone for a chopper to airlift the soldier to an aid station. Aquino’s life was saved. The entire squad survived.

For this act of heroism and sacrifice, Tom Siopes was awarded the Bronze Star Medal with “V” device for “Valor”.

Three weeks later, he put his life on the line again in yet another firefight, characteristic of the guerrilla warfare that marked the Vietnam War.

Ambush on the An Lao River

On the morning of April 13, 1969, Siopes, as a platoon sergeant in Company A, was leading a combat patrol along the An Lao River. Around mid-morning, his squad was ordered to cross the An Lao River and defend the ford so the rest of the company could cross over.

Above the riverbank, covered with jungle growth, three or four Viet Cong were lying in wait. Completely concealed in “spider holes” they had dug into the ground. As Tom’s squad was leaving the sandbar in the middle of the river, the Viet Cong opened fire with automatic small arms. Taken by surprise, Tom’s men at first froze, and then became disorganized. Completely exposed—surrounded only by water—they had no cover, not even a sandbar.

Quickly sizing up the situation, Tom knew they couldn’t stay there in the kill zone. Shouting encouragement to his men, he charged up the riverbank alone—100 yards ahead of his men—deliberately drawing enemy fire on himself to distract the enemy so his men could cross the river to safety. As he raced headlong up the riverbank toward the Viet Cong, bullets cracked over his head and around his feet. The Viet Cong kept firing at Tom, but could not stop him. A grenade exploded at his feet as he climbed the riverbank, injuring his leg and knocking him down. Still he jumped back up and kept going, charging at the enemy, firing at them continuously with his M-16. The wounded Viet Cong ran for their lives.

Tom Siopes was awarded the Silver Star for his valor that day, and also the Purple Heart. However, it was 38 years before he actually received the Silver Star. The original paperwork, submitted by his company commander, Captain Vance Forpaugh, had become lost in the system. When Forpaugh realized what had happened, he worked with platoon leader Lieutenant Joe Weker to resubmit everything again. Finally, in 2007, in a special ceremony at the VFW in North Andover, Tom Siopes was presented his Medal.

Tom Siopes arrived in Vietnam in November 1968, after a year of training Stateside and one week of jungle training at the 173d’s base camp in An Khe. He was assigned to Company A, 2nd Battalion, 503d Infantry, 173d Airborne Brigade, a separate brigade formed in 1964 as a strike force for all of Southeast Asia.

The 2nd Battalion penetrated into the most inaccessible enemy strongholds over a wide area—in the four densely populated districts of Binh Dinh Province, in the Central Highlands military region (II Corps Tactical Zone). They were so successful in throwing the Viet Cong and the North Vietnamese Army into confusion that the expected January 1969 TET Offensive never took place in Binh Dinh.

The 173d Airborne Brigade’s chief focus was keeping the Viet Cong disorganized and on the run. Search-and-destroy missions routed the enemy from their hiding places, destroyed their forces, equipment, and base camps.

In January 1969, the 173d discovered two of the largest enemy caches ever found by the Brigade. The 2nd Battalion found the biggest weapons cache of the operation in Binh Dinh—including a recoilless rifle, mortar, rounds for both, a stash of grenades, mines, small arms and ammunition. One week earlier another battalion had found a medical cache of 300 pounds of surgical instruments, drugs, plasma, and a microscope.

Wide-scale guerrilla warfare. Ambushes and firefights. Surprise attacks by day and night. An elusive, invisible enemy that used hit-and-run tactics—and knew the terrain well. U.S. troops could not see the enemy but knew he was there. An extensive intelligence network helped to accurately pinpoint where the enemy was, how large his force was, and what he was doing. “Snoopy” readings detected human odors. Red Haze, using heat-sensors, discovered the heat from enemy campfires. Yet when paratroopers entered these areas, the enemy often fled after light skirmishes, leaving behind caches of rice and medical supplies.

After his discharge from the military on August 29, 1969, Tom Siopes went on to serve with the Andover Police force for 37 years, retiring as a Lieutenant in 2011.

He still keeps in touch with Aquino, whose life he saved, and his CO Vance Forpaugh. As a Vietnam veteran, he knows full well how these returning heroes were vilified and shunned by the general public. Now he is determined that this will not happen to today’s returning veterans who lost limbs in combat during the War on Terror following September 11, 2001. Tom is active in a national, all-volunteer organization that builds custom-designed homes for these severely disabled veterans. Homes for Our Troops has already built 146 homes so far—with another 31 in progress—providing veterans with homes at no cost.

“I’m so happy these veterans are being welcomed home as the heroes they truly are, that they are not abandoned and forgotten,” he says. “Although we cannot change the past, we can learn from the mistakes of the past. And we can choose to make a difference and help those who have gone through the fire for us.”

In the Scriptures, the Lord promises: “ ‘Fear not, for I have redeemed you…When you pass through the waters, I will be with you; and through the rivers they shall not overflow you. When you walk through the fire, you shall not be burned, nor shall the flame scorch you…I will make the Valley of Achor [trouble] a door of hope’ ” (Isaiah 43:1-2, Hosea 2:15).