By Tom Duggan on March 7, 2012Comments Off on Who Really Cares About the Environment?

and Listen Carefully for the Crickets 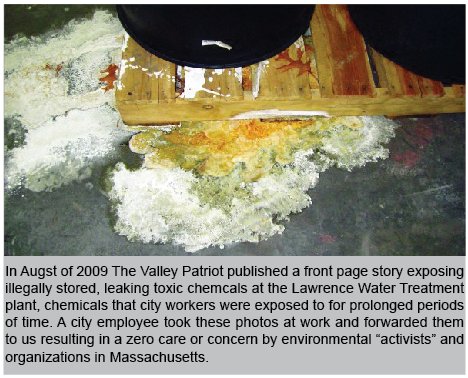 In July of 2009 the Valley Patriot wrote an explosive story, publishing Documents that reveled operators at the City of Lawrence’s brand new $26 million water treatment facility had failed to test the city’s drinking water for a bacteria called E.coli from July 2008 to February 2009. The Massachusetts Department of Environmental Protection (MassDEP) requires monthly testing for E.coli which can cause sickness if consumed. It was the second time in less than a year that the MassDEP fined Lawrence for failing to do mandatory e-coli testing.

When we published that story we had fully expected to all the liberal, self-anointed “environmentalists” (who form “community organizations” to save the planet and protect the earth) to express outrage, demand accountability and hold the city’s feet to the fire.

In August of 2009 we wrote an exclusive expose about dangerous, leaking toxic chemicals and hazardous waste at the City of Lawrence Water Treatment Plant, complete with photos (some of which are on this page) and testimonials from whistle-blowers and city workers who were exposed to the serious health hazards, working in and around the leaking toxic materials, which were open and accessible to anyone entering the facility.

City Workers had long complained to officials but nothing was ever done about until after we published our story.

Again, we expected individual environmentalists, local liberals or environmental activist groups to decry the storage of mercury and toxic chemicals at the water treatment plant in such a casual manner. I even called Masspirg, local noise makers whose politics were “pro-environment” and environmental advocacy groups to see if we could initiate some action on their part to call for accountability for such environmental destruction. 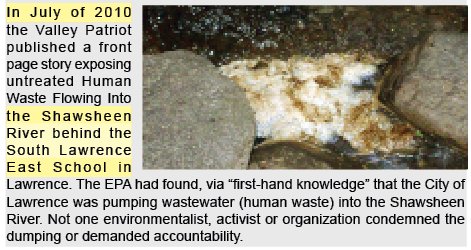 couldn’t even get them to give us a quote on the record, or return one phone call, email or blog posting.

Again and again we published stores of environmental hazards and disasters in The Merrimack Valley and the North Shore. Time and again we were ignored by the very people who demand public dollars to politic to “save the environment” and bill themselves as champions of our waterways and “precious resources.”

Other stories that we exposed and were ignored by so called environmentalists were:

Our story about the Lawrence DPW caught on film dumping construction debris into the Shawsheen River, (second story here), our story of the City of Lawrence pumping thousands of gallons of human wastewater into the Shawsheen river behind the South Lawrence East School, the illegal dumping at the Beliveau Cemetery in Lawrence, illegal storage of toxic chemicals at the city yard on the banks of the Spickett River, and leaking chemicals on High Street in North Andover, and so many more.

So why do I bring this up?

The fact is, this little monthly newspaper, owned and run by conservative Republicans, has exposed more real threats to our environment than any of the other newspapers in the Valley.

And yet, every time we did, we got the sound of crickets by local, state and regional organizations whose sole purpose … (or who SAY their sole purpose) is to advocate for clean air, clean water and protection of our natural resources.

That makes us living, breathing proof of the fraud that is the environmental movement.

If it doesn’t have to do with punishing businesses and property owners, if it doesn’t have to do with advocating a one-world government solution to global warming… er, I mean … global cooling… I mean … global climate change … these environmental activists really don’t care at all about doing anything substantial to protect our air, our water, or hold those who pollute it responsible for their actions.

Just remember The Valley Patriot the next time a self serving, faux-environmentalist starts preaching about global warming and how much they care about the environment. Remember us when a self-anointed lover of clean air and clean water starts demonizing conservatives .

Chances are, there’s a chemical spill, or illegal dumping going on in their neighborhood that they are willingly ignoring because; today the only acceptable environmental activism is that which is rooted in attacking property rights, growing government, increasing legislation that punishes private businesses and does nothing to protect the environment.

It has nothing at all to do with making the earth a better and cleaner place.

If it did, Lawrence, Massachusetts wouldn’t have these problems.