VALLEY PATRIOT EDITORIAL January, 2005  The attitude is pervasive. When North Andover was considering a $4 million override several years ago, a Finance Committee member publicly stated, “Our number one objective is to NOT cut any jobs.” Really? We thought that public safety and education might come in first?  While that story is now old, […] 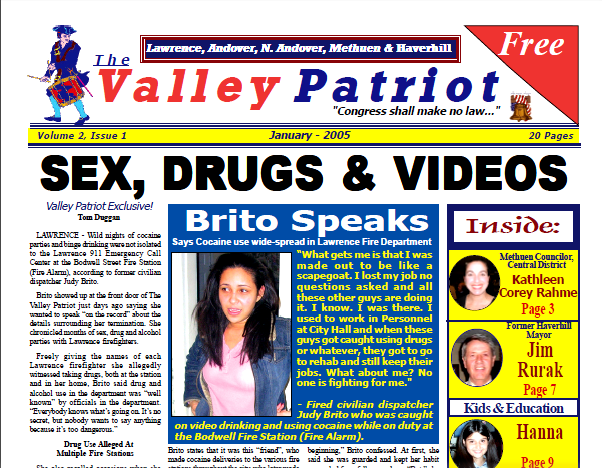 January, 2005 Looking back at some news stories of 2004 worthy of mention, there was the story about the Air Force locating a nuclear bomb they had “lost” back in 1958 when two jet planes, one of which was carrying the bomb, collided in midair. The pilot jettisoned it before bailing out, but the […]

Mara’s Apartment on the Piazza Navona – by Hartley Pleshaw

January, 2005 Somewhere, in that vast horror of newspapers, magazines and books I call my apartment (“A library that vomited,” as I once described it to a friend), is my most valued possession. It doesn’t look or seem like much: an 8 X 10 white index card—no decorations, no fancy printing. Just a white index […]

Bookkeeper’s Corner – In the Land of White Death

By: Dr. Charles Ormsby – January, 2005 You may be familiar with Sir Ernest Shackleton’s disastrous expedition to the Antarctic that spanned 22 months from 1914 to 1916. It has been retold numerous times in books, newspaper/magazine articles, and even a PBS Nova special. After considerable hardship, all members of Shackleton’s expedition survived the […]

By: Hartley Pleshaw – January, 2005 If American radio can be said to have had a post-World War II Golden Age, it manifested itself in Boston from the mid-1960’s to December 9th, 2004. It was the age of Jerry Williams, Charles Laquidara, Danny Schechter, Eddie Andelman and Gene Burns, among others. These talents, and others like […]

By: Kathleen Corey Rahme – January, 2005  With the holiday upon us, the giving spirit is apparent. But some of us give of ourselves on a regular basis and it is not reserved for a special time of year. It is the gift of oneself that is the greatest gift. I am thinking specifically of […]

By: Dr. Charles Ormsby – January, 2005  A boyhood attraction to trains, electronic gadgets, and Morse code earned Jeremiah (Jerry) Sullivan a ticket to see Europe by air. Actually, it was numerous tickets; they were for a B-17, and the reception wasn’t very friendly. Jerry was born and grew up in Lawrence. He graduated from […]