By Tom Duggan on November 18, 2012Comments Off on 2012 Was A Warning to the Tea Party… Ready For A Course Correction?

While Tea Party member are still in shock over the 2012 ass kicking we took in the polls on Election Day, now is the perfect time for a lecture on course correction.

Very high on the failed strategy list for the Tea Party is the way Democrats are treated as “the enemy” on all issues, and the unwillingness to dialogue with them.

Like it or not, Massachusetts is a one-party state dominated by Democrats. If the Tea Party doesn’t change course and bring some of those Democrats into the fold, dialogue with them, and actually work with them on key issues, well… we will continue to fail over and over.

Democrats who have never been to a Tea Party meeting and have no personal experiences with members of the Tea Party, often make the most vile accusations and attacks. That’s because they are operating on the belief that the Tea Party is “dangerous” based on what they have heard from their colleagues on the left. Once they meet with the Tea Party and see for themselves what it is all about, they are much less likely to be hostile, in some cases can even become allies.

The key to any success in changing the public image of the Tea Party and getting important legislation passed, is to infiltrate the Democrat Party and penetrate the strangle-hold the leadership has over the minds of it’s members.

TIME TO WALK THE WALK OR SHUT UP AND SIT DOWN 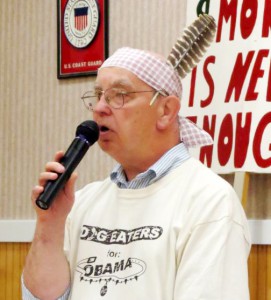 Tea Party activists say that the Tea Party is nonpartisan, yet before the primary election in September, the Merrimack Valley Tea Party held what was dishonestly called a “Candidate Forum”.

The impression people were given was that it was open to all candidates. As we were leaving I heard some members say they were not voting for particular candidates because “They didn’t even bother to show up.”

With all due respect to those who planned that “candidate forum” it should have been called “A Forum for Preferred Candidates” because Democrats and Independents were purposely not invited. In fact, one Republican who did attend was told he couldn’t speak.

For the record, Diana DiZoglio took a stand (before the primary) in favor of Voter ID, she was shunned by the Tea Party. I think our members would have liked to hear what she had to say on that issue before the election.

Then there’s newly elected Senator Katie Ives. Ives said before the primary (against her fellow liberals) that she would “champion” legislation for 209A reform. She also championed heavy penalties for local officials who refuse to comply with freedom of information requests, and is an avid defender of the first amendment.

These are all issues sacred to the Tea Party and yet, the candidates and the members were robbed of the opportunity to discuss those issues. And now that both women have won, they will be voting on those issues at The State House.

IF YOU ALWAYS DO WHAT YOU’VE ALWAYS DONE…

It’s time to start being as fair minded and open minded as we say we are. Otherwise, we become what the media and the Democrat leadership says we are. It may be fun to attend a Tea Party meeting every month to listen to speakers who agree with us on all the issues. But it doesn’t accomplish anything.

Forging an alliance with rogue Democrats on key issues benefits everyone.

But you can’t forge alliances with individual members of the dominant Democrat Party by slapping them in the face before they even take office… simply because they don’t agree with the Tea Party 100% on every issue.

Katie Ives and Diana DiZoglio, by virtue of being Democrats, will be able to help the Tea Party advance some our most important goals in very big way.

If a Democrat like Katie Ives is willing to break ranks with her party, come to tea party meeting, and listen to our concerns … moreover, if she is willing to come and speak to Tea Party members and take questions, she should be welcomed with open arms. In fact, the Tea Party should be reaching out to her and inviting her to the next meeting.

Just imagine how powerful it would be when Governor Patrick or some other Democrat leader begins vilifying the Tea Party and a liberal, tree-hugger from Newburyport takes to the floor of the Senate and says: “I go to Tea Party Meetings, they are not racists, they are not hateful, in fact I work with them on many issues and what you are saying is simply not true.”

If Tea Party members are licking their wounds after a crushing defeat on November 6th, just imagine two years from now when we lose more conservative members of the legislature and move backward even farther.

The only way to stop that slide is to reach out to those long considered the “enemy” and start to make gains on issues that the Democrat leadership opposes, but many of their members do not.

I can tell you from covering Katie Ives that she will be no shill for the leaders on Beacon Hill. Neither will Diana DiZoglio. Unless, of course, the Tea Party continues to shun them and pushes them in that direction.

Right now The Tea Party is at a crossroad in Massachusetts. We can make the needed course correction or just keep repeating the failures of 2012.

2012 Was A Warning to the Tea Party… Ready For A Course Correction? added by Tom Duggan on November 18, 2012
View all posts by Tom Duggan →