By Tom Duggan on June 6, 2006Comments Off on Some Hilights and Lowlights of the Flood

Every year people who work for “non profit” organizations like Lawrence Community Works make their fortunes crowding into Lawrence’s council chambers, whining about how badly “they” need more of your tax dollars to build and secure housing for the “poor” people of Lawrence.

Yet, as I witnessed some of the greatest displays of heroism during last month’s flood, one question kept nagging at me (especially when the relief effort started and the severity of the human devastation became apparent):

Where were all the poverty pimps?

Where was Bill Trainor, and Lawrence Community Works?

Where were all those people who say their life’s mission is to “help the poor people of Lawrence”? 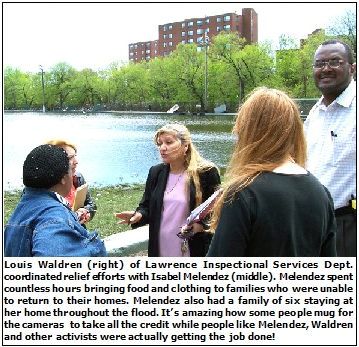 They certainly have time to sit through hours of meetings at City Hall when Community Development Block grants are being handed out. They have plenty of time and resources to hold mock neighborhood meetings and orchestrate public demonstrations of how the “underprivileged” in Lawrence need them to make their lives better.

And yet, as the floodwaters rose and then fell again, I saw no sign of these self-anointed “champions of the poor.”

What I did see was this: neighbors helping neighbors.

I saw Lawrence become the model of how to behave and how to handle a major national disaster. I saw police, fire, DPW and inspectional services personnel from the city of Lawrence, Methuen and North Andover, taking amazing risks to save people from the flood waters and provide emergency services. 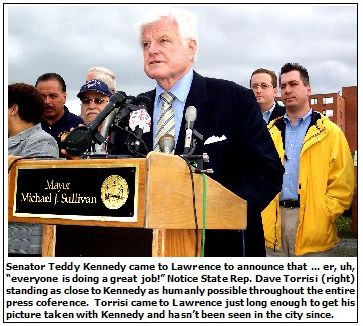 I saw politicians like Dave Torrisi (who did absolutely NOTHING during the flood or its aftermath) whisking into Lawrence for a photo opportunity with Senator Ted Kennedy, and then slithering back out of the city when the media disappeared.

I saw a senile and obviously sickly Senator Kennedy taking advantage of flood victims by coming to Lawrence to make a major announcement. That announcement?

“… er, uh everyone is doing a good job …” and by the way, illegal aliens (er, uh… undocumented) will get government assistance … eventually.

I saw volunteers from CERT (Community Emergency Response Team), The Salvation Army and LOCAL Red Cross volunteers feeding, housing and clothing those who had lost everything.

I saw community activists (like Isabel Melendez) walk away from opportunities to be on TV so they could hand out one more sandwich, one more cup of coffee, one more dry blanket to someone in need.

I saw people who wouldn’t even say hello to each other one week earlier, working together to try and save stranded residents in flooded neighborhoods along the Spickett River.

I saw Lawrence public school children pushing cars out of flooded intersections and then riding their bicycles all the way to the Methuen High School shelter to see what they could do to help.

I saw police officers consoling homeowners who had lost everything, crying along with them while their furniture floated away. 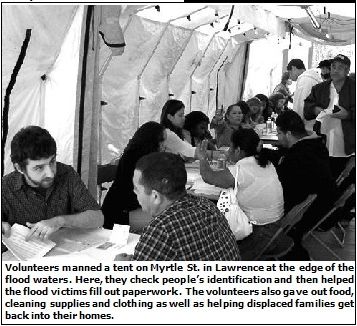 I saw Willie Lantigua bringing medication and food to sick residents in the curfew zone at 2 a.m., long after he thought the reporters had left for the night.

I saw residents of Lawrence under curfew and lock down with zero incidents of looting, no deaths and no social unrest like what we saw from the people of New Orleans after Hurricane Katrina.

In fact, Chief Romero said that crime was actually DOWN during the week of the flooding and it’s aftermath.

But here’s what I didn’t see:

I didn’t see any sign of (or effort by) Lawrence Community Works or the other “non profits” who breeze into town at budget time to fight for those government dollars.

And that’s really too bad because, for ten days, people at the Red Cross shelters had nobody making phone calls to help find temporary or permanent places to live.

What a tremendous difference organizations like Lawrence Community Works could have made in the lives of those flood victims, filling the very large void left by the joke we call the National Red Cross …

… that is, had they actually bothered to show up and lend a hand.

After all, housing the poor and under-privileged is their specialty … right?

Well, I guess that only applies when the city, state and federal dollars go directly through them so that they can take their cut.

But not so much, when someone else is administering the money or getting all the credit.

Wouldn’t it have been wonderful if, while everyone was pulling together to help those in need, the dozens of so called “non profits” and their advocates had actually pitched in and done something to help… ANYTHING?

My hope now is that Lawrence city councilors remember who was there to help the flood victims in their desperate hour of need … and who was not.

And then I hope they act accordingly when it comes to handing out all those Community Development Block Grants next month at budget time.

I know I will be at those meetings … and I will be paying attention!