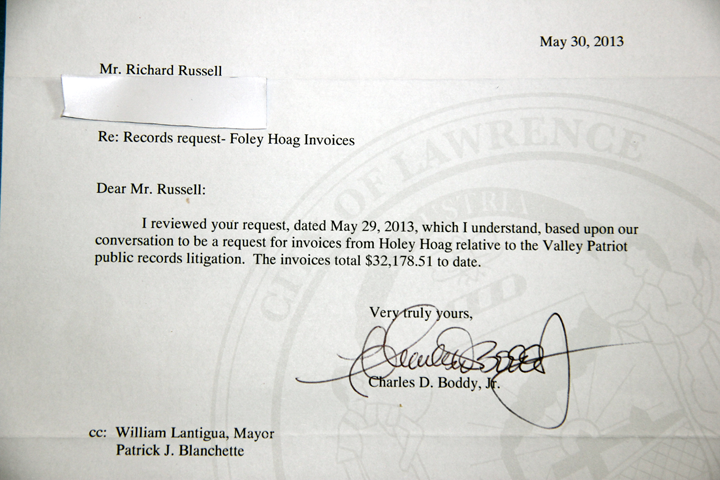 “… what Mayor Lantigua and City Attorney Charlie Boddy are doing is, they are using your public money to hire a law firm out of  Boston, to prevent you the public from getting access to documents you already paid for. It’s like something out of the Twilight Zone.” ~ Tom Duggan, Publisher The Valley Patriot

Records obtained by the Valley Patriot reveal that Lawrence Mayor William Lantigua has spent a stunning amount of state taxpayer’s money, ($32,178.51) to fight the release of public records regarding legal bills and rental payments to a private law firm (DiAdamo and DiAdamo) representing the City of Lawrence on worker’s compensation claims.

The public records request was initially filed by Valley Patriot publisher Tom Duggan in February of 2012. Mayor Lantigua’s office claimed they never received that request, and the Valley Patriot re-filed it  in July of 2012.

Under Massachusetts Public Records Law, MGL. CH 66, public records must be turned over within ten days of request by any member of the public.

Lawrence Mayor Lantigua refused to turn over the records, first claiming the documents were not public (despite Boddy’s letter claiming the contrary, below) then, through Jeremy Evans (of Foley and Hoag) arguing in court that the amount of money paid to a private attorney to do public work was “privileged“.

Judge Cornetta said that the public has the right to know how their government is spending tax payer dollars, citing “transparency in government”.

“It would seem to me your client should understand by now that Mr. Duggan is not going away. This matter is not going away,” Judge Cornetta told Attorney Evans. Cornetta that the city had until May 31, 2013  to turn over the complete information sought by The Valley Patriot.

As of the publication of this story (June 2, 2013) Mayor Lantigua refuses to comply.

“The fact is, City Attorney Charles Boddy sent us a letter last year stating that the information we requested were indeed public records,”  Valley Patriot publisher Tom Duggan said. “This should never have gone to court.” 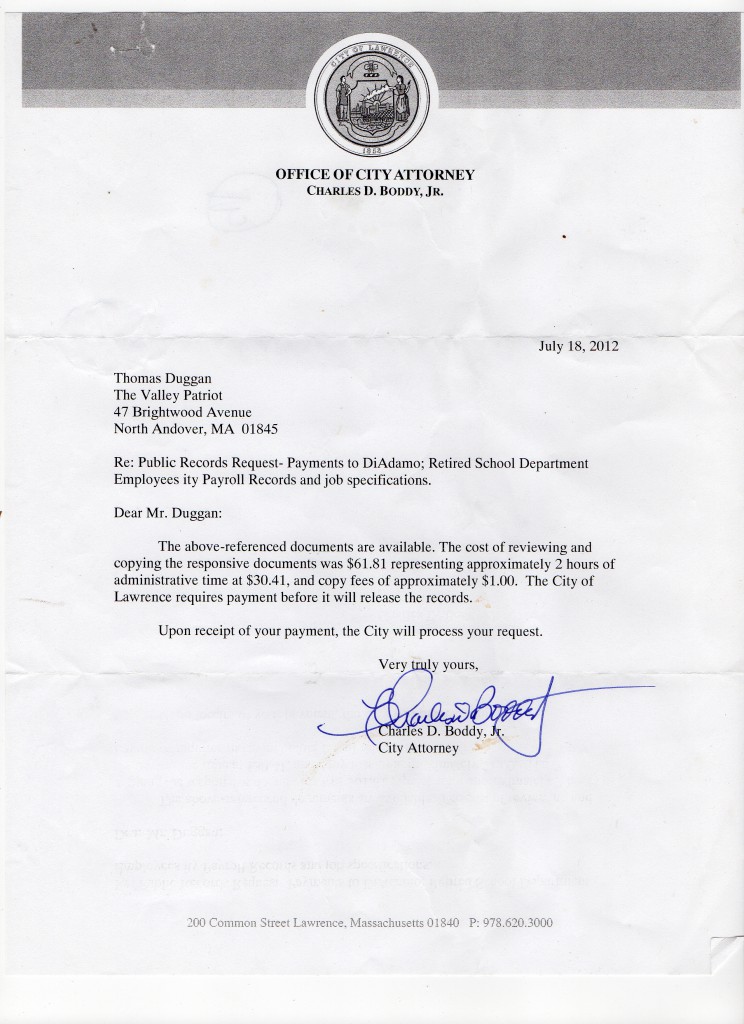 “His letter said he would turn over the documents if we paid the city $61.81, claiming it would take merely two hours to produce these public bills. He took our check, he cashed our check, and then refused to turn over the records. Now think about this… ” Duggan continued.

“… what Mayor Lantigua and City Attorney Charlie Boddy are doing is, they are using your public money to hire a law firm out of  Boston, to prevent you the public from getting access to documents you already paid for. It’s like something out of the Twilight Zone.”

“On top of all that we have incurred thousands of dollars in legal bills to fight for these public documents, documents that their letter said should have only cost us $61.81. We wil be looking to recover those costs.”

“Lantigua doesn’t care because it’s not his money, so at the end of the day, he gets to use unlimited amounts of taxpayer money to actively conceal records from them. No wonder he is always smiling. He gets to screw the taxpayers and make them pay for it.”

“He slapped Secretary of State Bill Galvin’s Office in the face. He has slapped Judge Murtaugh and Judge Cornetta, indeed the entire court system in the face. He continues to slap the taxpayers in the face. And yet, no judge has imposed any fines, sanctions or granted us legal fees. No government agency has stepped in to put a stop to this. No newspaper has filed a brief to stand with us in our court battle. And we still do not have the complete information we requested.”

“This is such a waste,” Duggan concluded in frustration. “That $32,000 dollars spent to fight our $61 records request could have hired a police officer. They could have hired a firefighter. The City has a City Attorney they are already paying more than $120,000 a year to handle these issues. His name Charles Boddy, the very same guy who said in writing that these documents were public and would only cost us $61.81. What does that tell you about what is really going on in Lawrence?”

Duggan said that The Valley Patriot will continue to fight “alone if we have to” for release of public documents from Lawrence Mayor William Lantigua. The next court appearance on this matter is expected to be within ten days.