By Tom Duggan on October 18, 2012Comments Off on More Legislators Call For Takeover of Lawrence, Removal of Lantigua

More Legislators on Beacon Hill are stepping forward this week to say they are tired of the state tax payers footing the bill for what Andover State Rep. Jim Lyons has called “an ongoing criminal enterprise” in the City of Lawrence underMayor William Lantigua.

Opposition to Lantigua Grows at the State House

Tarr Hill, Jones and Rhoton all joined Representative Lyons, Candidate Kevin Cuff, City Councilor Marc LaPlante and School Committeeman Jim Blatchford in saying a fiscal control board must be installed by the Commonwealth of Massachusetts to take over all of Lawrence’s finances. 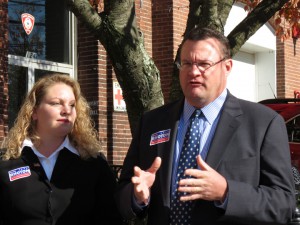 “Quite frankly, I would say [there’s a complicity from the Patrick administration in not wanting to get it [done] as fast as they could, to get to the bottom of things in the City of Lawrence,” said Representative Brad Jones.

“It’s a crime that this has gone on and a level of accountability has been lacking. Our frustration is that the path the Patrick administration had put forth to help Lawrence was not going to get the job done. I think obviously, the case is such that some strides have been made but the current administration in Lawrence clearly does not have Lawrence’s best interest at heart. They have their own personal interests at heart And as long as that’s the case, the City of Lawrence is going to be held back from moving forward.”Lawrence Mayor Willie Lantigua is currently under investigation by the FBI, The United States Customs Service, Essex County District Attorney Jon Blodgett, Secretary of State Bill Galvin’s Office, Attorney General Martha Coakley and several other law enforcement agencies for corruption.

Bonilla was a sergeant on the Lawrence Police Force when Lantigua was elected but was immediately promoted over lieutenants and captains to be the city’s deputy police chief.Lantigua demoted Deputy Chief Driscoll what was in that job at the time, to make the promotion of Bonilla.

Also indicted were Lantigua’s former Chief of Staff Lenny Degnan who was charged with solicitation of a bribe with corrupt intent, knowing solicitation of a bribe, unlawful use of an official position, conspiracy, extortion or attempted extortion. Mayor Lantigua was named in both indictments and his name was prominent in the indictment and conviction of former Lawrence Superintendent of schools Wilfredo Laboy.

Ipswich State Representative Brad Hill said that he plans on addressing Lantigua’s criminal administration in the next session of the legislature, which begins in January.

“If you recall back in history [2010] when we were debating Lawrence being able to get that($35million bailout) loan, in the Republicans caucus in the House offered an amendment for receivership of the city of Lawrence. That’s something I still feel very strongly about. I think what we are seeing and reading in the last couple of months is deplorable, and quite frankly criminal. We need to do something about it in the legislature and my hope would be that in the next legislative session, we get that opportunity. Clearly, clearly we feel very strongly that it’s time to take Lawrence back and put it back where it should have been.”

CURRENT LAW NOT BEING FOLLOWED 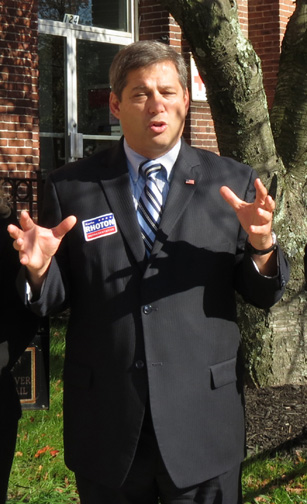 “I don’t think it’s any secret how I feel about this. I have been on record, I believe the provisions of the current legislation that govern this situation are not being complied with. You know that I wrote to the overseer Bob Nunes, I suggested that it was his responsibility, right now, to call for a control board. I don’t think anything has changed that has remedied that situation. I think it’s still the case,” Tarr said.

“But I want to also want to pick up on something you said in your question, and that’s whether or not this affects other people and whether other people should have a seat at the table. And I think they should. Let me tell you why.”

“It’s also very true in one other way. And that is communities like this one, North Andover, provides public safety services into Lawrence and all the surrounding communities as well.”

“In fact, we were shown that in a very compelling and dramatic way at the meeting that Representative Hill referenced that happened at the request of fire departments to look at this issue. So, we are providing public service from throughout the region, [and] there are subsidies coming in from taxpayers throughout the state.”

“The problems in Lawrence are not limited to the borders of Lawrence. And that is why the Commonwealth of Massachusetts does have a role here, needs to play that role, and I would argue that as much as I have supported the provision that Brad [Hill] referenced relative to receivership and a control board, I support those but I don’t think the current law is being complied with and I think the powers that be right now ought to step up to the plate and do what the law prescribes [full receivership and the removal of Lantigua].”

“If not, I guarantee you we will revisit this in the next legislative session.”

“I am for a board of overseers to come in and take over I am the only candidate to call for mayor Lantigua’s resignation. He should do right by the people of Lawrence and step aside and serve the people in that capacity. 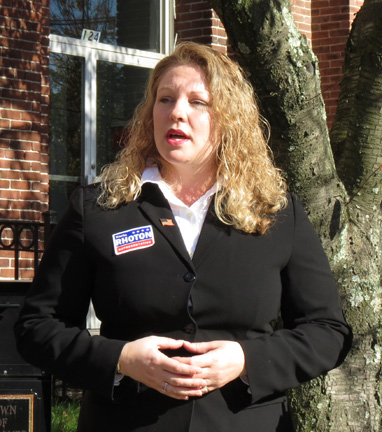 The Massachusetts legislators took their tough stand on Lantigua and receivership for the City of Lawrence at a press conference that was held at North Andover Town Hall for the purpose of endorsing Rhoton for the 14th Essex Representative’s race.

Rhoton is seeking to replace the current Representative David Torrisi, who was the loser in the Democrat primary last month against newcomer Diana DiZoglio.

Torissi has been a longtime supporter of Lantigua, advocated for all of his proposals in the legislature and testified before them in 2010 asking them to allow Lantigua to borrow $35 million.

The two will debate on Paying Attention Radio Program on Saturday October 27th on 980AM WCAP at 10AM. You can listen live at www.980wcap.com

More Legislators Call For Takeover of Lawrence, Removal of Lantigua added by Tom Duggan on October 18, 2012
View all posts by Tom Duggan →