MASSACHUSETTS – After nearly five years of trying to get the Massachusetts legislature to reform the state’s impotent public records law, Valley Patriot publisher Tom Duggan says that they have made a good first step towards holding public officials accountable for not turning over public documents.

If passed by the Senate and signed by the governor, the new law would limit the amount of money that can be charged for documents, expands the time frame for officials to turn over records, and allows court costs and legal fees to those who are forced to sue a city or public agency to get access to public records. The new law will also allow for punitive damages if an official or agency is found to be purposely concealing public records.

MAKE PUBLIC OFFICIALS PAY THE FINES? NOT SO FAST!

Missing from the final bill passed last week, however, was what Duggan called the most important sentence he wrote.

“They took out language that says public officials get fined $50 a day, out of pocket, for every day they refuse to turn over public records. That’s because the Mass Municipal Association, the very people who will be paying the fines, lobbied Beacon Hill. That language has to be put back in the bill when the Senate takes it up at the beginning of the year.”

The public records reform bill’s legislative sponsor, Diana DiZoglio said that penalties are the key to making sure this law is enforced fairly and evenly.

Co-sponsor of the House version of the bill, State Representative Linda Dean Campbell (D- METHUEN) said that the bill was good legislation, adding, “It’s not perfect. In government you have to compromise. The other side is unhappy with some of the language, and your side [The Valley Patriot] is unhappy about some of the language. As a whole though, Chairman Dempsey did a great job making this a balanced bill. I think it’s a going to be a good law when the governor signs it.”

Senator Kathleen O’Connor Ives said that the proposed penalties taken out of the bill would have “incentivized timely compliance with reasonable public records requests and encouraged increased government transparency and accountability.”

The state’s 40-year-old public records law (MGL Ch. 66) was written in the wake of Watergate in an attempt to fool the public into believing the Massachusetts legislature was forcing government transparency.

“It was a great deception and it worked for forty years,” Duggan said, “but the free ride is over.”

The current law requires that government officials turn over public documents within ten days. But the law has never been uniformly enforced because there is no penalty for those who violate it.

Most government officials go out of their way to turn over public records upon request. Others, however, concerned with being cast in a bad public light, (or that documents will expose wrongdoing by their agency or town) have gone out of their way to conceal those records. 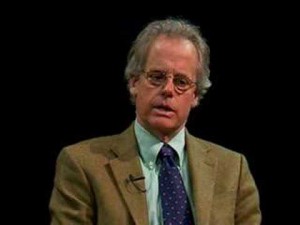 “We submitted a public records request from (then) North Andover Superintendent Hottle. We were investigating reports that the School Committee Chairman had used school computers to campaign for a meals-tax vote at Annual Town Meeting. All we wanted were her emails. He could have forwarded them to me at no cost. Instead, he sent me a bill for thousands of dollars, hoping I would prefer not to spend so much on the story,” Duggan said.

After several one-on-one meetings with Duggan, Hottle eventually turned over the emails at no cost.

“This is what some of our government officials have been getting away with under the current law,” Duggan continued.

“Especially when they have something to hide. They jack up the price of producing documents to make it prohibitive, and in some cases impossible to obtain. Or, they tell naïve citizens that the documents they requested are not considered public records. Or, they drag their feet and claim the records don’t exist. Or worse, like with the city of Lawrence, they charge you money for the documents, cash your check, and then never give you the records you requested. What the hell. If there’s no penalty for violating a law, you can come up with all kinds of excuses for not following it.”

Duggan testified with Representative DiZoglio at a joint House and Senate Committee, where they both begged legislators not to remove the language holding officials personally accountable with stiff fines. The subcommittee voted for the bill unanimously and merged it with other pieces of legislation, creating a multi-faceted reform package.

GETTING THE LAW CHANGED

In 2011 & 2012, The Valley Patriot sued the City of Lawrence and won several judgments after (then) Mayor Lantigua refused to release public records. Lantigua admitted, “because no money comes out of my pocket, you will never get those records as long as I am mayor.”

The Valley Patriot incurred nearly $11,000 in legal bills fighting Lantigua in Superior Court. But, when three years of court battles were over, Judge Cornetta shrugged his shoulders and said there was nothing he could do. Cornetta (2) said in open court that he would like to fine the city for refusing his multiple court orders, but there was no provision in the law allowing him to do so.

Duggan first submitted language for a public records reform bill with Andover Rep. Jim Lyons, but the Lyons bill was sent to a subcommittee where it died a very quick death.

The following year, Lyons submitted the same language, but Duggan enlisted the help of Reps. DiZoglio and Senator Ives. After getting voted out of three committees with a favorable recommendation, the bill died again when the legislature adjourned for the year without voting on the bill.

Last year, Senator Ives resubmitted the bill, as did Rep. DiZoglio in the house. More than three years after first being submitted, the legislature finally voted on the measure and passed it unanimously, but not without modifying the bill significantly. (SEE CHANGES BELOW)

The bill can still be changed in the Senate, but any modifications would have to be approved by the House again before Governor Baker can sign it into law.

If the House and Senate cannot come to mutually agreeable language, the bill will be reconciled by a joint committee of senators and representatives to negotiate the final wording of the bill. It will then go the governor’s desk to be signed or vetoed (rejected).

Even if the governor vetoes the bill, it can still be passed by two-thirds vote of the legislature.

Duggan says he met privately with Ways and Means Chairman Dempsey just days before the final wording of the bill was released. He also met with chairman Kocot to try and close loopholes in the bill.

“I was very troubled at how quickly they bent over for the insiders and lobbyists who work for the very people paying the fines when they conceal public records. This is a loophole the size of New Jersey. They actually have a provision in this bill that says a public official does not have to turn over public records if their feelings get hurt. I couldn’t make that up if I tried. Now, for the first time in the history of this country, a public record can be deemed NOT a public record if a government official says he feels ‘harassed or intimidated’ by the request.” (SEE BELOW)

“What public official isn’t going to feel harassed or intimidated when a newspaper is investigating their finances? It’s absurd.”

“I have a lot of faith in the Senate. In particular, Senators Ives and Eldridge, who have been very solidly behind public disclosure laws and this bill in particular. First order of business is to take out the language about hurting people’s feelings. Then stiff financial penalties need to be put back in.” 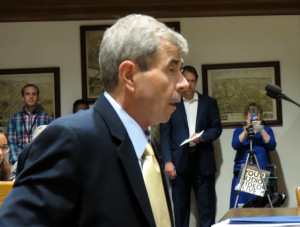 In the meantime, Secretary of State Bill Galvin is trying to get his own watered down version of public records reform passed by having his employees and “interns” gather signatures on state time for a ballot initiative. Galvin’s initiative petition would strip most of the more stringent provisions of Duggan’s bill. Galvin has himself been the subject of complaints for concealing public records. Under the current law, Galvin as Secretary of State is responsible for investigating all complaints for public records violations.

Galvin tried to initially block the public records reform bill, but changed his tune just weeks before the measure was voted on in the house. Galvin told a joint subcommittee that he wanted to decide the language of the new public records law, calling for a public records commission to decide what is and what is not a public record. When that failed he decided to try and get a ballot question to get the changes he wanted.